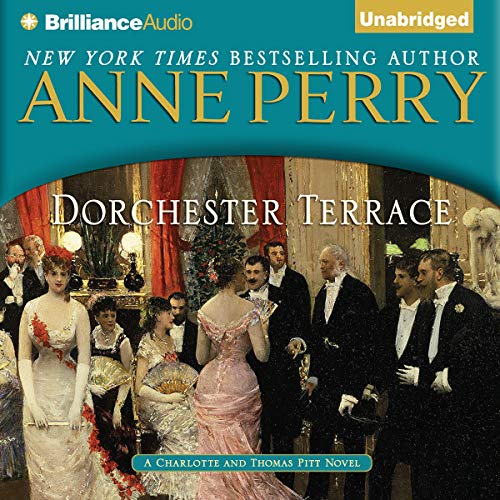 By: Anne Perry
Narrated by: Michael Page
Free with a 30-day trial

Anne Perry’s acclaimed Charlotte and Thomas Pitt novels have made London’s exclusive world of wealth and power an addictive literary destination for listeners everywhere. This masterpiece, a haunting story of love and treason, invites us not only into the secret places of Britain’s power but also into the innermost sanctums of the fin de siècle Austro-Hungarian Empire.

Thomas Pitt, once a lowly policeman, is now the powerful head of Britain’s Special Branch, and some people fear that he may have been promoted beyond his abilities. He, too, feels painful moments of self-doubt, especially as rumors reach him of a plot to blow up connections on the Dover-London rail line - on which Austrian duke Alois Habsburg is soon to travel to visit his royal English kin.

Why would anyone destroy an entire train to kill one obscure Austrian royal - or are the rumors designed to distract Pitt from an even more devastating plot? He must resolve this riddle at once, before the damage is done.

Meanwhile, in a London sickroom, an old Italian woman - at the end of a romantic career as a revolutionary spy - is terrified that as she sinks into dementia she may divulge secrets that can kill. And a beautiful young Croatian woman, married to a British power broker, hoards her own mysteries. Apparently, all roads lead to the Continent, and Pitt suspects that between them these two fascinating women could tell him things he desperately needs to know. But as the hours tick by, it seems that the only woman Pitt can count on is his clever wife, Charlotte.

No one sustains mesmerizing suspense better than Anne Perry. In Pitt’s trial by fire, his wrenching moral dilemma, and his electrifying moment of decision, the beloved best-selling author gives us a climax never to be forgotten.

What listeners say about Dorchester Terrace

I've been an Anne Perry fan since The Cater Street Hangman, the very first Pitt and Charlotte book, and I read each book as it came out. When she took Pitt out of the police and into Special Branch, the plots seemed to be labored and not very believable. They did improve gradually, and with Dorchester Terrace Perry has finally gotten Special Branch up to her previous standards for believable and interesting plots. As usual, her characters are well-drawn and thoroughly fleshed out.

Gerard Doyle's performance is excellent, and this book was entirely enjoyable.

I really enjoy Anne Perry's books. This book is one of her best. The setting is in a period of time that you wonder how any crimes were solved.

What made the experience of listening to Dorchester Terrace the most enjoyable?

I am a BIG Anne Perry fan but this is the first time I am doing it by audio. I will definitely listen to it again as audio has different dimensions from reading - you can skip over things in a book but when you listen you actually savor each word. The story was incredible but the author does tie it all together at the end...kind of. There are some loose ends but I figure as she always does, they will be mentioned in the next adventure of Charlotte and Thomas.

Yes it did. It was Prince Alois` visit that was upcoming so the reader knows the story was building up to a climax.

I like the ones with Vespasia and Narraway - I think the latter is old but far younger than Vespasia but it seems a spark of interest and respect bordering on some kind of chemistry is suggested. Why not? They are both free and like each other.

Yes and it got to where I was annoyed at routine interruptions like at a coffee shop when I had to give my order! I was literally pointing to an item on the menu to the waiter because I didn`t want to be distracted from Dorchester Terrace.

Anne Perry needs to have an epilogue. The story ends where it should but the reader is left hanging about the other characters in the book. What was the fallout of what Thomas does? Any kudos? There is still a crminal out there. Also it is annoying to always read about these awful boneheaded aristocrats who give Thomas a hard time yet don`t seem to get their comeupptance. Also Emily Radly continues to be a simpy sister and could use some character development.

Anne Perry is a master at the Victorian mystery

Would you listen to Dorchester Terrace again? Why?

I will be listening to Dorchester Terrace again. I usually take my time and savor Anne Perry's books, whether I am reading or listening. I couldn't unplug on this one.

What was one of the most memorable moments of Dorchester Terrace?

When Thomas Pitt used force to achieve justice. An entirely new dimension for his character.

I must listen to it again to pick a favorite. The performance of the book was excellent, from the maid rescuing the dog to Charlotte stealing the show at Kensington Palace.

I keep thinking that after so many books centered on Charlotte and Thomas Pitt that the plots will get stale or predictable. Not the case, at all. Fascinating. Thank you Anne Perry!

The story was good, the narration pleasing, and the experience of listening wonderful! This is definitely a good addition to my library!

I am almost done with this series of books. These last few have been the best of the bunch. They always leave me wanting more. In this book Thomas PItt is adjusting to a new position as head of the Special Branch. It was very gripping.

This read, my 2nd, I matched the period to WW1

I read before, enjoyed then but this time I pulled up history, matching the story time period to just prior to WW One. The history made this fictional story more poignant and clarified the passion and desperation of the characters even more than my 1st read.

A very entertained book to listen. Specially, the stories with Thomas Pitt and Charlotte Pitt.

I just love Anne Perry. The way she writes and describes the characters of her novels as well as the period of time in history were her plots happened, makes me feel that I am in front of a beautiful painting, waiting for the listener to become alive.
Performance was perfect.