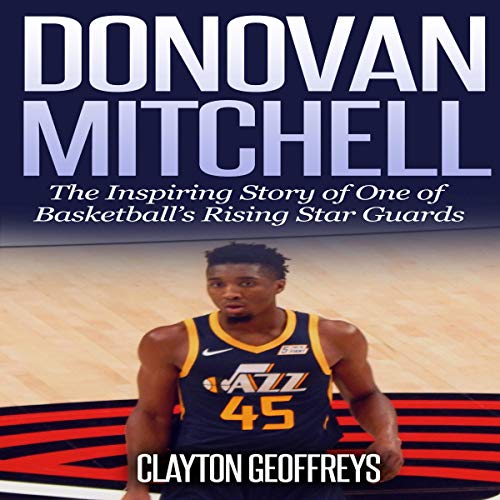 Donovan Mitchell: The Inspiring Story of One of Basketball's Rising Star Guards

By: Clayton Geoffreys
Narrated by: James Mingesbruney
Try for $0.00

In Donovan Mitchell: The Inspiring Story of One of Basketball's Rising Star Guards, you'll learn the inspirational story of basketball's shooting guard, Donovan Mitchell. While many would have thought that Gordon Hayward's departure from the Utah Jazz in the summer of 2017 would have spiraled the franchise into years of being on the outside looking in come playoffs time, Donovan Mitchell had something else in mind. In just two seasons, Mitchell has averaged over twenty points per game and become a key leader of a young and rising Jazz team.

Since that playoff campaign, the Jazz have continued their relevance in the Western Conference as a formidable opponent and look to continue that trend for years to come.

Donovan Mitchell is easily one of the most exciting young players to watch for many years ahead. He still has yet to enter his true prime, but one thing is certain: Mitchell has a bright basketball career ahead of him.

Get this basketball audiobook on Donovan Mitchell today if you're looking for an inspiring basketball biography book to listen, or a gift for a basketball fan!

Here is a preview of what is inside this Donovan Mitchell audiobook:

What listeners say about Donovan Mitchell: The Inspiring Story of One of Basketball's Rising Star Guards

that was the best biography that I have ever read. incredible. I would love to reread THIS book. I love mitchell, so that makes it better.