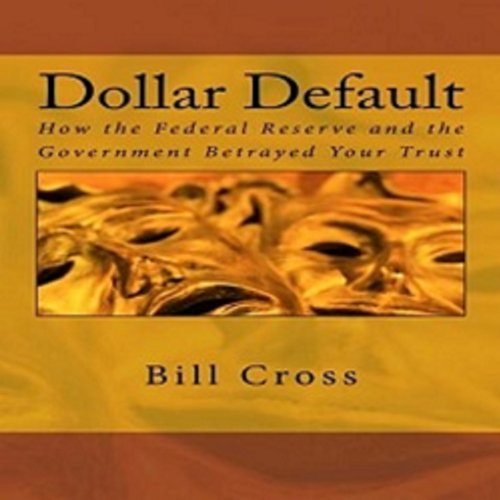 Dollar Default: How the Federal Reserve and the Government Betrayed Your Trust

Dollar Default: How the Federal Reserve and the Government Betrayed Your Trust

President Richard Nixon's momentous decision to break the tie between the dollar and gold in August 1971 has become a legend in financial history. Nixon's action was the final step in a 38 year process that began with FDR's legislative initiatives. In 1933 FDR led the charge to end the right of the American people to own gold. Nixon's action went one step further. This step ended the right of foreign nations to exchange their dollars for gold, and broke a long-standing covenant. Through this measure the final connection between the dollar and gold ended. In Dollar Default, former Money Manager Bill Cross cuts through over three hundred years of propagandized faux history to voice a concise, balanced and opportune reminder that there was a profound reason the framers of the Constitution defined the dollar in terms of silver and gold. By and large Americans have forgotten if not been told of their ancestors first experiments with paper money. It was disastrous, so much so that the framers insisted on defining the dollar in terms of silver and gold in terms of weight and measure. Dollar Default tells us why. With a broad brush Bill Cross details the key moments in American financial history that have led us from paper money to sound money and back again to paper money. Written for the general reader who has a love of history Cross reveals the critical background information for a first step forward to greater understanding of money in America. With context being ever so important Cross takes us back to antiquity, brings us forward to early American history and then carries us up to the present day. After reading Dollar Default you will have a solid grasp of the basics of American financial history, and why gold and silver were important in the founding of America. Dollar Default will change forever the way you view the paper money in your wallet, and connect you again with your heritage.