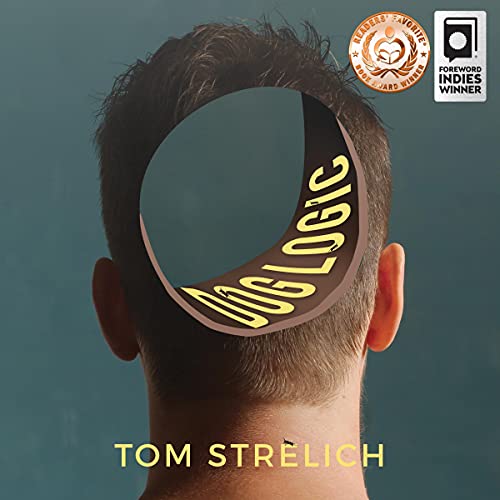 Funny, inflammatory, and strangely prescient, a duck-and-cover fable. If Dr. Strangelove and Hitchhiker's Guide to the Galaxy got together and had a litter of puppies you'd get Dog Logic.

Hertell Daggett is not what he used to be: once married, once a physicist, and once shot in the head in a New Year's Eve accident, or possibly the 4th of July. The doctors got most of the bullet out, but a few specks of copper remain floating in his brain, connecting parts no longer connected in the rest of us, filaments of species memory going back to the beginning of time. He remembers the yodeling of dinosaurs, the dry humor of mastodons, and the rubbery smell of trilobites.

Hertell discovers a time-capsule, actually a vast time-cavern full of people who've lived beneath the pet cemetery since 1963 as part of a long-forgotten Government program to preserve Western civilization in the charred aftermath of the massive nuclear war triggered by JFK's assassination - at least that's what their computer simulation predicted. Hertell leads them into the modern world, like one of those lost tribes stumbling from the jungle into civilization, only this time it's not the lost tribe that's overwhelmed by civilization, but very much the other way around, and they will pay for it.

What listeners say about Dog Logic

Strelich had me laughing, smiling, and shaking my head with an incredibly creative story that combines a deep understanding of technology, government bureaucracy, and human nature with a knee-slapping and sometimes sardonic sense of humor that grabbed my interest and never let it go. I loved his characters and was truly impressed with his deep insight and thoughtful poignant analysis of our human condition and how our society has evolved (if one can use that word). Moreover, Strelich's book couldn't have been timed better given the ridiculous political situation we are currently experiencing. I really enjoyed it and recommend it highly.

What made the experience of listening to Dog Logic the most enjoyable?

The first half of the book is a light hearted comedy that is fun to read. Then, the book makes a gradual shift to provide an incredibly insightful commentary on our present culture. It feels almost like reverse dystopian future book at times, and I found myself taking a thoughtful look at our culture and especially the things I take for granted.

I averaged more than an audio book a month last year and Tom Strelich's performance here is phenomenal. Although this is the only book he has narrated, I believe his talent for audio performance is equal to the best in the business.

If you could sum up Dog Logic in three words, what would they be?

The best book I have read in several years. I am amazed that it has not sold millions of copies.

What other book might you compare Dog Logic to and why?

There is nothing like it. It starts out like a standard "What is really going on here?" kind of story. The author does that masterfully creating fully realized characters with a great sense of humor, but the book really takes off into the phenomenal when things start to become clear.

Which character – as performed by Tom Strelich – was your favorite?

The main character. He is a sweet intelligent and sort of confused guy. But, ...

I don't know if it could be done. It is kind of like the movie "The Crying Game" in that it takes an incredible twist that no one would have predicted. But in TCG, the twist was the payoff. Here the twist is the point of entry.

Tom Strelich is a great storyteller.

I thoroughly enjoyed listening to Tom Strelich's Dog Logic. The eerie buffer music sets the stage for Tom to tell his story about our long lost past, present, and future.

An amazing piece of fiction

When trying to predict what a book will be about, a name like "Dog Logic" doesn't give you a lot to work with. For me that was fine, no expectations meant my brain was free to wander where the story led me. This is a story you've never read before. It's not derivative of some other work, it's entirely unique and original, something I can't really say about many books I've read.

My first thoughts were of how delicious the prose was. It seems to flow effortlessly from Strelich. But it is prose wrapped around a great story, so it's not just prose for its own sake.

Strelich narrates the book, and rarely am I happy with the author being the narrator. I have to say though, Strelich is an excellent narrator. The character performances, especially Hertell, are on-point. He captures the simple, "common sense" nature of his personality just perfectly.

When choosing a book, I like to read the 5-star reviews and the 1-star reviews. The 1-star reviews for Dog Logic seem to take issue with the presumed politics of the author. One could argue that the characters are speaking the author's voice and ergo they are simply a mouthpiece for his ideology. I did not read it like that at all. Yes, there are political elements in the book, but when you couch them from the perspective of a culture that was isolated from the world, living in its own microcosmic society, then they make perfect sense and are rightfully expressed.

All in all, I would say that Dog Logic was well-worth the credit I spent on it, and I would happily purchase other works from Tom Strelich.

not enough story and not enough characters. boring expose on america and the present times.

The writer's skill as he used excellent technical ability to relay complexities of this intricate story supported my 5 star rating. Much of the humor would have been funnier if not so close to the truth!

Pleasantly surprised. Not at all what I expected. The author does an amazing job narrating.

A brain injured physicist is our narrator as we experience an amazing, mind blowing event, that, of course, the government can't believe. Pure fun!

A wonderful performance, by an excellent author! It's great to be able to hear Tom read his own words in, well, his own words... and he really does so with aplomb.