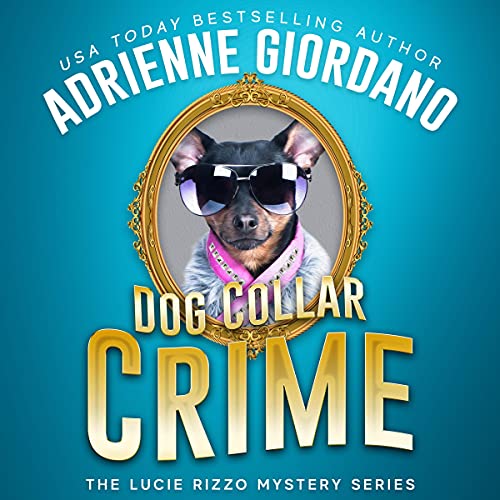 By: Adrienne Giordano
Narrated by: Laura Princiotta
Try for $0.00

Out of work and down on her luck, Lucie Rizzo is forced to do the one thing she's long avoided - move home to her nutty, mob-infested family. A move that brings her back into the tempting arms of Frankie Falcone, the ex that never fails to make her heart sit up and beg.

When Lucie parlays her temporary dog-walking gig into a career making fancy dog accessories, Frankie becomes her number one supporter. Life starts to look like a walk in the park...until three of her bling-wearing clients are dogjacked.

Despite help from the on-again, off-again Mr. Fix-It in her life, Lucie is thrown into an investigation that's more Goodfellas than good doggie. One that could shatter her new life and her second chance at love.


This is a fun story to read or listen too. It is very well written and narrated. The voice, Laura Princiotta does a great job. Her voice is the right age for the main character and she does wonderful voicing the other characters, even the one with the tough guy attitudes. She voices the story well enough for me to close my eyes and see it playing out before me.
The story is a unique romantic comedy that is guaranteed to leave you in stitches. I solved some of the mystery before it started to unravel, but I grew up reading mysteries and watching tough guy shows. I was wrong to suspect Frankie at the beginning, he after all is in love with Lucie and a man in love does do stupid things. So I’m giving a little away here, but ladies I have to tell you, he an upright citizen. The dog - nappings and almost nappings are hilarious and I have a soft spot for Lucie’s brother who ends up bruised and battered in the process of supplying us with humor. The story delves into the past where secrets are always well hidden and the key to solving the present situation is close and personal to Lucie.

story was well writter with a well developed storyline. The chatacters ate believable with interesting personalities. Going against your parents is a hard choice even if you know they are wrong. part of growing up is the ability to do what is right. This is a nice story for relaxing at night.

really liked the story plot, but the reader was terrible to listen to,, she didn't even try to get in character. She doesn't read very well either

Story was fine, I didn't care for the narrator very much. I wish she had better vocal changes between make and female voices.

Not exciting, mysterious, or romantic.


What ruins most of the good is the narrator. She reads lik a 45 record played at 33 rpm. Tedious.

Lucie is A Different Kind Of Character

Would you consider the audio edition of Dog Collar Crime to be better than the print version?

Yes. I prefer audio books to printed books because the narrator gives life to the characters that reading just can't do. I like to listen and read at different times. But I don't usually get both versions unless they are paired as this one was.

Lucie was my favorite but Frankie was close. I liked Lucie because she had gumption. She lost her banking job and supplements her income by walking dogs and then making dog accessories. What a clever theme. The characters were just all good and well developed. I like the way Adrienne Giordano writes.

Which character – as performed by Laura Princiotta – was your favorite?

Lucie. She did all the characters with good voice changes but Lucie just comes across the best. Not surprising since she is the star of the story.

nothing extreme. It is a good read and easy to pick up and put down so it would makes for good bedtime reading.

Lucie can't make up her mind about how she feels about Frankie. She waffles and dithers over to be or not to be involved with him.

Lucie's feelings for Frankie are very complicated, but she can't seem to understand that she needs him to be there for her. Frankie is very patient because he is very sure of what Lucie means to him and he is willing to hang with her, hoping she would realise that she is meant for him. Complicated... yet assertive - and hot - and the way they both mature while dealing with the many crazy crimes is really interesting and somewhat appealing.

Walking the dogs is not just a job. She loves the dogs and understands their various personalities and is shocked at the dog nappers, amid her confusion about who is so wicked to grab her charges. In the midst of all the crimes, she manages to start a business relating to her dogs. She is full of fun and is a real feisty personality.

The narrator certainly helps to make the story entertaining by her narrative proficiency. I loved how she shouted Frankie's "Whoa" whenever he was surprised and she made it fun to listen to this audiobook

Thanks Adrienne for a really funny and enjoyable, well written book. Way to go!

Such an enjoyable story!

What made the experience of listening to Dog Collar Crime the most enjoyable?

This is the first book I've read (listened to) by Adrienne Giordano and I am hooked. This was such a fun book - every time I laughed my husband would say "You're listening to that dog book again, aren't you?" I could not guess who was responsible for the different incidents that kept happening and there was just enough suspense to keep you guessing. I loved how the dogs personalities came through in the descriptions of each of them and really liked Lucie!! I can't wait to read more by this author!!

This light mystery includes an adorable main character, her furry charges and a cast of interesting secondary characters. Add a few kidnappings, ties to the mob, an iffy love interest to Lucie's attempting to start a nice side business for herself, after her career in Investment Banking takes a nose dive and you get Dog Collar Crimes. Enter Frankie and an old romance is rekindled, but will it be as complicated as the rest of Lucie's life? I especially enjoyed the strong conclusion, which had a few unexpected surprises in store for me. No animals were harmed in this funny caper. The narrator did a good job and was a proper fit.

This book was a good read and quite funny at times first book I’ve read by this author and looking forward to second book in series.