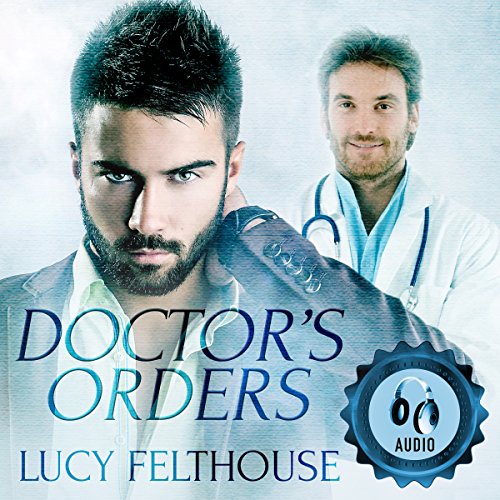 Hospital porter Aaron Miller isn't expecting a very exciting birthday. He and his doctor boyfriend, Blake Colville, are working opposite shifts, leaving Aaron to go home to an empty house and the prospect of another shift the following day. Just as he's leaving work, however, an unexpected sexy encounter in a supply cupboard leaves him feeling in a much more celebratory mood. And an impending dirty weekend away with Blake just puts the icing on the non-existent cake. But who needs cake when you're dating a dominant doctor?

Note: Doctor's Orders has been previously released as part of the Brit Boys: With Toys boxed set.

What was a surprise, and a happy surprise at that, was that I enjoyed the characters' softer and tender moments just as much. I liked that this story revolved around an established couple. The caring, and the trust, were believable and present even during the sexy scenes. It was also enjoyable not to have manufactured drama...

I hadn't listened to this narrator before and he did a good job and enhanced the story. There was no hesitancy during the sex scenes and that accent just amped up the heat! If you're not sure about accents, give the sample a listen before you pass on this. You might find yourself liking what you hear - I know I did.

Overall, this was steamy read/listen. It is a solid 3.5 stars, tours up to 4. It was a fun way to spend an hour and a half. While I might not listen to it repeatedly, it was definitely an enjoyable listen.

I received a copy of the audiobook in exchange for an honest review.

so good and so kinky! i want a HOT dr.!
short, easy, and a very hot listen! I would recommend this to any one who likes hot kinky sex stories!

Kinky is what should be the title.

What was one of the most memorable moments of Doctor's Orders?

The most memorable sing to me was when Blake came back from being out all day and brought Aaron a couple of new toys. Aaron was not expecting any of that and was a bit surprised and nervous about the entire situation.

What does Peter Revel-Walsh bring to the story that you wouldn’t experience if you just read the book?

I think the narrator Peter Revel-Walsh brought the story alive. Most narrator's when they are having to do two points of view or more. All the characters 10 to sound alike. However Aaron and Blake sounded like two different characters and I really appreciated that.

I received this audiobook at my request in exchange for an honest review.

I really enjoyed the story because it shows that even though two people have to demanding careers they still make time for one another. Also I have to say I really enjoy Lucy Felthouse's books. Always makes me want to have that type of significant other who is just a bit kinky and also a bit sweet and caring. She always writes boyfriend goals when it comes to her characters.

Would you recommend Doctor's Orders to your friends? Why or why not?

Sure, for the ones who like this kind of book I'd recommend it

What does Peter Revel-Walsh bring to the story that you wouldn’t experience if you just read the book?

Starts with a Bang

It was fun to see this established couple coming together for a special weekend. The story starts with a band and is hot and sweet by turns.

Wasn't this book a pleasant little surprise. I'm not sure how this ended up in my wishlist. But the price was good and the narrator sounded good in the sample so I went for it. And... Well... Lets be real.. This narrator could have been reading the phone book and I would have happily purchased it. His voice is so pleasing he definitely was a good choice for this book. I swear he has a Gerard Butler type sound to his voice. Yummmyy..
And If you want a book that is basically all sex with a little bit of story thrown in this is it. you've picked the right book.
The two men. Aaron and Blake have been together a decade. There wasn't a whole lot of character development, or backstory on their relationship but I don't think it was really needed for this short book. Even after being together for so long they still like to meet up for hot sex in empty random rooms at the hospital where they work. They get some time off work to go away on vacation for Aarons birthday. That pretty much sums up the entire story of the book.. Every Single Other Thing is SEX. I had Zero clue that there was a BDSM aspect in this book before getting into it, but it does, and this book is Dirty and Hot. And made even hotter by the narration.

This Doctor's Orders is more of the romantic type, with lots of steamy sex of course. However the overall feel and tone of the storyline and charachters changes around that to be of a romance. Storyline was alright, if you need something to listen to, not on speakers if you have neighbors, then go ahead and give it a try if you can.


I was voluntarily provided this free review copy audiobook by the author, narrator, or publisher

Doctors Orders by Lucy Felthouse was a good read. It is Aaron's birthday but he wasn't expecting to do anything special since he and his boyfriend work in hospitals. This was a good read.

This Book Is In Wrong Categorized -- Gay Romance

This book is mis-categorized. It should be in the category of gay romance. If I had read the summary I would've figured that out but I agree to read this book in exchange for my review. That is a contract, so I proceeded.

Aaron Miller works as a transporter in the same hospital as his boyfriend Blake Colville, a doctor. They rarely get to see one another as they work opposite shifts, but they are committed and get by. However, they are looking forward to 2 days off and will be celebrating Aaron's birthday.

What happens during that weekend leaves nothing to the imagination, so I will stop my review here as I don't want to spoil for anyone considering reading this.

Peter Revel-Walsh has a deep and sexy voice – appropriate for this book. It is the 1st time I have listened to Revel-Walsh, I will watch for more of his work in the genres I listened to. 4 fantastic stars

I really enjoyed Lucy Felthouse's book called MEAN GIRLS and gave it 5 stars, across the board. I am having trouble deciding how to rate DOCTORS ORDERS. I think that I will go with a fabulous 4.

*I was given a copy of this book in exchange for my thoughts.

Thank you for reading my review, if you found it helpful would you please select – yes – below? I also invite you to follow me on Audible. Thank you!

The narration was good and Peter really brought the characters to life.

What a little gem of a story. Blake and Aaron play in the bedroom rather than 24/7, so this glimpse into their busy life was perfect. Aaron wasn't really expecting to celebrate his birthday their working schedules made it difficult to be together, so being pulled into a cupboard by his Doctor boyfriend Blake started the story off in the perfect way. I loved how Lucy Felthouse conveyed the depth of their relationship so quickly at the start and established the nature of their D/S relationship as well. The games they played on their weekend away were hot and fun.

I've never listened anything narrated by Peter Revel-Walsh before. I admit his accent took me awhile to settle into but once I had he was perfect for these two British lads. My view of the narration is that the story was read me rather than performed, which was fine. I had no difficulty identifying who was speaking in this style and I think it suited the story. Overall I think it's perfect if you want to listen to a short steamy feel good story

I received a copy of this book from the author/publisher in return for a fair and honest review.