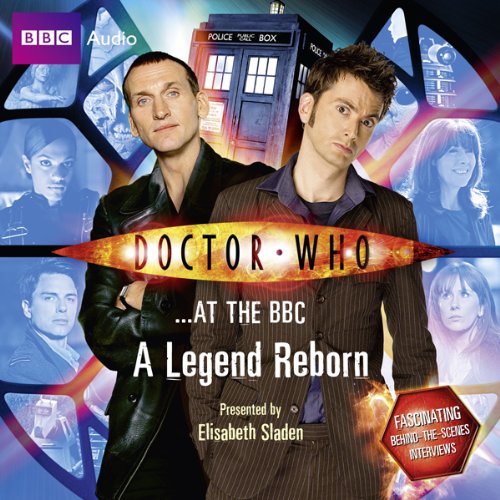 Doctor Who at the BBC: A Legend Reborn

By: BBC Audiobooks Ltd
Narrated by: Elisabeth Sladen
Try for $0.00

An all-new volume of interviews and behind-the-scenes features from the worlds of Doctor Who, presented by Elisabeth Sladen.

In 2005, after 16 years off-air, Doctor Who returned to BBC Television - and soon became more popular than ever before. In this special anthology of clips and interviews, featuring newly released material, Elisabeth Sladen journeys back to the recent past to delve into the show’s dazzling success.

With the help of extracts from radio programmes as diverse as Go 4 It, Jo Whiley, PM, Newsbeat and The Now Show, she explores the run-up to the launch of Series 1 and follows the programme’s progress right up to 2009, with the the impending departure of David Tennant.

Featuring the voices of David Tennant, Catherine Tate, Christopher Eccleston, Kylie Minogue, Freema Agyeman, Russell T Davies, and many others, this is an absorbing retrospective look at how Doctor Who returned to our screens to capture the hearts of millions of fans.

What listeners say about Doctor Who at the BBC: A Legend Reborn

If you could sum up Doctor Who at the BBC: A Legend Reborn in three words, what would they be?

This is an entertaining short collection of interviews with the actors, writer and other production members of Doctor Who. It was fun listening to the actors perspectives of working on the show as well as learning about how they cast companions, such as Martha, and the news of David Tennant's departure from the show. It was quick, but full of informative tidbits that Whovians, both young and old, will treasure.

I love Sladen. No mention of her and Billie Piper in School Reunion! Otherwise cute.

Behind the Scenes on the Reemergence

This is a wonderful peek into Dr. Who, especially the guest appearances on British shows that we don’t get here in the States. Bittersweet because we have since lost Elizabeth Sladen. It was wonderful to hear Chris Eccleston and even better David Tennant. A must for fans of the show.