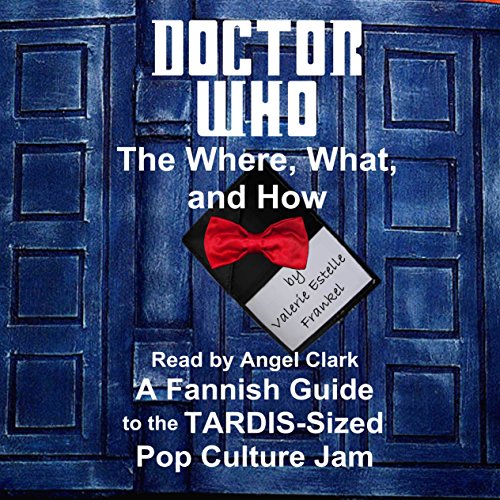 Doctor Who - The What, Where, and How

A Fannish Guide to the TARDIS-Sized Pop Culture Jam
By: Valerie Estelle Frankel
Narrated by: Angel Clark
Length: 5 hrs and 59 mins
Categories: Sci-Fi & Fantasy, Doctor Who
4 out of 5 stars 4.0 (2 ratings)

Doctor Who - The What, Where, and How

Doctor Who is a show about books, TV, and science fiction for the fans within us all: the Tenth Doctor loves Harry Potter, the Eleventh Doctor wears costumes, and Martha Jones wants to record Shakespeare's lost play and sell it on the Internet. As the characters gush over Agatha Christie or tangle with Men in Black, they enter a self-referential world of fiction about fiction, delighting in pure fandom. Producers Davies and Moffat nod to their other creations, from Sherlock to Casanova, and share their love for both the classic series and the larger world of Doctor Who novels, audiobooks, and comics. As the franchise riffs off Star Trek, Star Wars, Alice in Wonderland, and Hitchhiker's Guide to the Galaxy, it both celebrates the world's most popular works and takes its place among them.

What did you love best about Doctor Who - The What, Where, and How?

This is not a book for someone with a casual interest in Doctor Who. This is pretty much the Doctor Who version of the Who's the Boss Community episode. This is a guide to every pop culture and literary reference in every episode of Doctor Who and every Pop culture and literary reference in the world to Doctor Who. Yes Abed and "Doctor Space Time" are in there. A true Doctor Who fan will find it fascinating. The causal and curious will likely be turned into a Time Zombie by chapter 3.

Stapling together various quotes and other useless trivia, this tells you nothing new, and is littered with mistakes (Colin Baker appeared in Time Crash? really?) It doesn't really seem to know what it is... is it a book of lists, or recounting plots, or psychological/critical analysis... and there's lots of very obvious observations that even a 5 year old would pick up ... and others that simply aren't there (and even includes a Moffatt quote that disagrees with the authors assertion that Bells of St John was a critique of Wifi and technology culture).
It skips through topics with no real logic. It frequently quotes other materials or the show itself....
And then we come to Angel Clark. Possibly the worst ever reader I've heard... (she seems experienced too!). She has no clue how to pronounce most names of characters or actors (Nicola rhymes with "cola"... Ay-dric, Ecc-less-ton... "Neemon" instead of Nimon... ). I mean if it was the odd one fine, but its throughout. Do some research (either the director or the reader should have). When she attempts quotes from the show she really doesn't sound much different, and certainly nothing like the characters. Her American drawl just doesn't suit a book about a British show either, but could be forgiven if not for the mistakes above.
Avoid... thankfully it was my free first book...