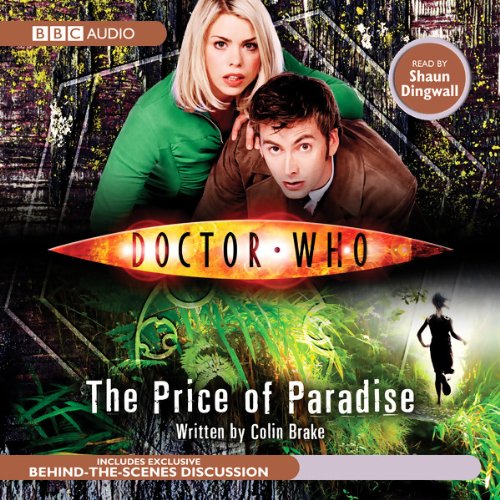 Doctor Who: The Price of Paradise

By: Colin Brake
Narrated by: Shaun Dingwall
Try for $0.00

Laylora, the Paradise Planet, is a world of breath-taking beauty, where peace-loving aboriginals live in harmony with their environment. Or do they? The Doctor and Rose arrive to find that the once-perfect eco-system is showing signs of failing. The paradise planet has become a death trap as terrifying creatures from ancient legends appear and stalk the land.

Is there a connection between the human explorers who have crash-landed and the savage monsters? What secret lies at the heart of the natives' ancient ceremonies? And what price might one human have to pay to save the only home he has ever known? When a planet itself becomes sick, can there be a cure? The Doctor and Rose find themselves in a race against time to find out.

Featured are the Doctor and Rose as played by David Tennant and Billie Piper in the hit series from BBC Television. Read by Shaun Dingwall, who played Pete Tyler in the TV series.

What listeners say about Doctor Who: The Price of Paradise

Dr Who: Price of Paradise review by ScifiAliens

A well read (you can tell 'who's who' in the vocalizations) morality tale along environmental lines. (Hopefully) poses questions over whether environment users become monsters either in its use or protection and how much pollution is 'acceptable.'
Enough action to hold your attention as well as good development of characters. Relationships are explored enough for the listener to care about them and hope they all survive to the end.
Somewhat lengthy for a north american listener, but Doctor Who always tended to be.
While it's not actually a character in the story line, this reviewer would have liked more involvement with the TARDIS.
Stars for good vocalization, plot and character development, believable character interaction, description of setting, and story conclusion and wrap-up.

from book to audio

I read the physical book once it came out so it's nice to have it in audio form. I really liked the story, flows nice and the characters feel like themselves. I feel the narrator captures rose well but the doctor seems a bit off. never the less I loved the story and would recommend.

A little let down.

I misunderstood the summary of this story. I thought that David & Billie were going to be reading for their respective characters. I was disappointed that they didn't. I wish this was made really clear in the summary. I am in the middle of the story. It is good. Shaun Dingwall does a great job.

For a one man narrative this is a great performance. Great impression of the 10th Doctor and Rose. I've always loved this story and have it in hardback format as well as audio. You're in for a treat!