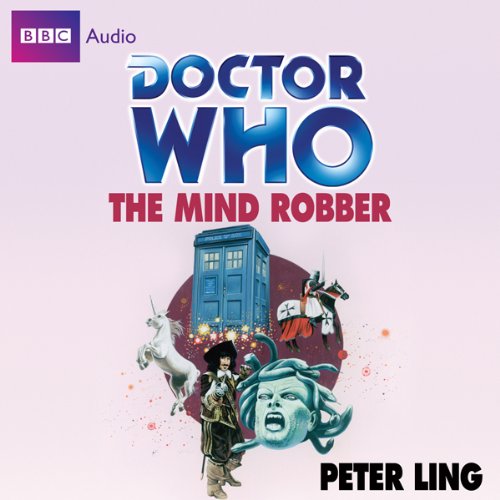 Doctor Who: The Mind Robber

By: Peter Ling
Narrated by: Derek Jacobi
Try for $0.00

To escape a catastrophic volcanic eruption the Doctor takes the TARDIS out of space and time - and into a void he can only describe as 'nowhere'. But the crisis is far from over and when the time-machine's circuits overload, the TARDIS explodes.

The Doctor, Jamie and Zoe come to in a dark unearthly forest. There they encounter a host of characters who seem somehow familiar: a beautiful princess with long flaxen hair, a sea traveller dressed in eighteenth-century clothes, and a white rabbit frantically consulting his pocket watch...

What is happening to the three time-travellers? What strange power guides their actions? In the Land of Fiction who can really tell?

Derek Jacobi, who played The Master in the Doctor Who episode 'Utopia', reads Peter Ling's complete and unabridged novelisation, first published by Target Books in 1986.

What listeners say about Doctor Who: The Mind Robber

An excellent narration of a classic Doctor Who story unlike any other in the series. Well worth listening even if you've seen the episodes in question.

A classic story made even better

Would you consider the audio edition of Doctor Who to be better than the print version?

Not really. I've not read the print edition but I find audio books makes my commute much more enjoyable and means I can put my headphones on and not walk into people on the way into the office. In terms of whether it makes things better, it's a personal preference.

The Doctor will always be my favourite character in this story. You discover what is happening as he is discovering it too so you can relate much closer to him than his companions.

The battle of wits between the Doctor and "The Master" (no, not THAT Master. The story makes that clear pretty early on) where they are trying to outwit each other by adding lines to narrative.

In a way, yes it was. The story flowed and I was able to visualise the plot through both the narrative and the televised adventure it is based upon.

A classic story well narrated by the great Sir Derek Jacobi. The only detraction was that accents doesn't seem to be Sir Derek's strong point and Jamie's Scottish accent was terrible albeit clearly Scottish sounding. Otherwise, an essential addition for any fan of the show.

One of the more quirky Doctor Who serials of the sixties, The Mind Robber novelisation is written by its original author and read superbly by Derek Jacobi. If sixties Who is your thing then give this a listen, you'll not be disappointed.