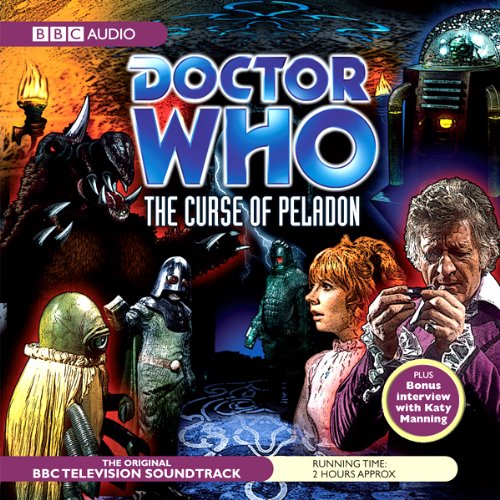 Doctor Who: The Curse of the Peladon

By: BBC Audiobooks
Narrated by: Katy Manning,Jon Pertwee
Try for $0.00

The TARDIS arrives on the storm-lashed planet of Peladon, just as it is being assessed for its suitability to join the Galactic Federation. Mistaken for Federation delegates from Earth, the Doctor and Jo become involved in a series of dramatic events at the conference. King Peladon's Chancellor has died in mysterious circumstances, and his High Priest is vehemently opposed to the Federation's advances. Amongst the other delegates are hermaphrodite hexapod Alpha Centauri, half-automaton Arcturus, and two Ice Warriors whose species the Doctor knows as old adversaries.

Confined together in the Citadel, they struggle to counter myth and superstition with logic and reason. Is the Curse of Peladon about to strike those who form a union with the Federation? Has the Royal beast Aggedor risen to defend the planet's independence? And could one of the delegates actually be working to double-cross the others? The Doctor and Jo must work fast to solve these and other questions, and at the same time stay alive.

What listeners say about Doctor Who: The Curse of the Peladon

Doctor Who: The Curse of Peladon

Jon Pertwee, Katy Manning are Two of my Favorite Doctor Who and Companion. I got all of Jon Pertwee's episodes as well as all of Tom Bakers's episodes and Peter Davisons's.