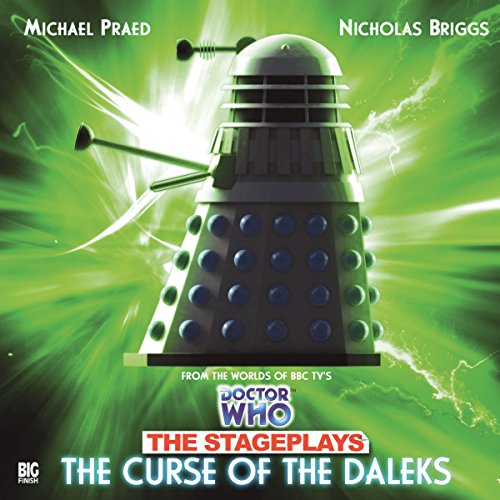 Doctor Who - The Curse of the Daleks

A special audio adaptation of the Doctor Who stage play from the 1960s.

The spaceship Starfinder is taking two dangerous criminals for trial on Earth. En route they crash through a meteor storm and have to make an emergency landing on Skaro - the planet of the dreaded Daleks.

But Captain Redway and his faithful crew don't anticipate any trouble. After all, the Daleks were defeated 50 years ago, and now they are completely inactive. But when a crate full of mysterious devices is discovered and the Daleks start to come back to life, it becomes clear that there is a traitor amongst the Starfinder's crew...a traitor intent on reactivating the power of the Daleks!

Written by David Whittaker and Terry Nation and directed by Nicholas Briggs.

"The Daleks are at their conniving best, foreshadowing their role in writer David Whitaker's later TV stories." ( Doctor Who Magazine)

What listeners say about Doctor Who - The Curse of the Daleks

A great look back

Definitely not the best Dalek story, not even by the standards of 1965, but this is definitely worth a listen to any fan who is curious about the history of the series.

A great little story. A Dalek story without The Doctor. The hero was played by Michael Praed. He played one of my favorite Robin Hood’s in the 80’s . The radio play was quite old fashioned, but still good.

A fun bit of entertainment. Ok, not quite up there with Ridley Scott's epic, but it makes a nice change to not know entirely who the good guys are and who is going to make it through to the end. Plus casting Michael Praed from Robin of Sherwood adds to the nostalgia value.