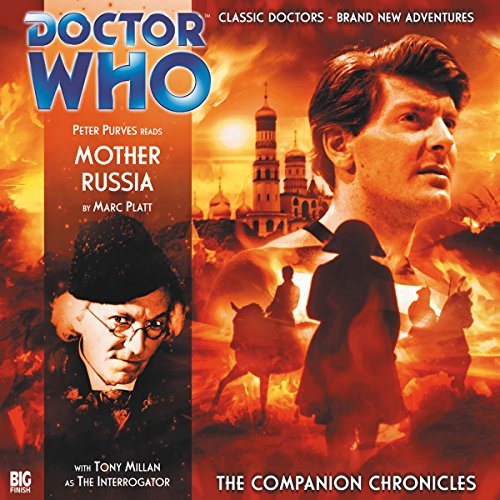 By: Marc Platt
Narrated by: Peter Purves,Tony Millan
Try for $0.00

It's 1812, and the Doctor, Steven and Dodo get ready to spend their winter in a Russian village. The French are on their way, but that's not the only invasion the travellers will have to deal with.

"Old school Doctor Who at its best. So good, you'd swear you saw this one on TV." (Total Sci-Fi)

What listeners say about Doctor Who - The Companion Chronicles - Mother Russia

Would you try another book written by Marc Platt or narrated by Peter Purves and Tony Millan ?

Yes. I've found some of Platt's Doctor Who work very enjoyable, notably his Unbound plays. Not so much his novels, or his grossly overrated Cyberman origin story.
Peter Purves is always worth a listen. He's not the best William Hartnell impersonator (William Russell probably is) but he's good enough.

Remove the (other) alien element.
This vexes me with the Doctor Who pseudohistoricals. The first time they did one - with the Meddling Monk - it was a novelty, and a significant story element in its own right.
But it's long since been overworked into a tiresome lily-gilding exercise. Here, for instance, it's as if 1812 Russia isn't an interesting enough setting in its own right for our time travellers, so a generic alien needs adding to the mix. It really should be possible for the TARDIS to land somewhere in Earth's history without somebody else landing there too.
I can't pretend I didn't know it was going to happen - it's hinted at strongly enough in the blurb - but I hoped this would at least offer a fresh approach to the idea. But it really doesn't. The alien's special ability also means the twist is bleeding obvious.
That's not to say it fails to entertain. The TARDIS crew's arrival in Russia (not far from Moscow) is enjoyable, and it was pleasing to have them stay for several months rather than simply pop in, look around, fight off the evil alien, and pop out. Use of honest to goodness narration (as opposed to contrived "Look, that ski pole is rising off the ground of its own accord" dialogue) is always a good thing.
So, not a total waste of time, but rather less than it could have been.

What does Peter Purves and Tony Millan bring to the story that you wouldn’t experience if you had only read the book?

It's a play written for the audio medium, not a book.

Given the nature of this product, it's exceedingly unlikely that this would be made into a film, but yeah, why not?