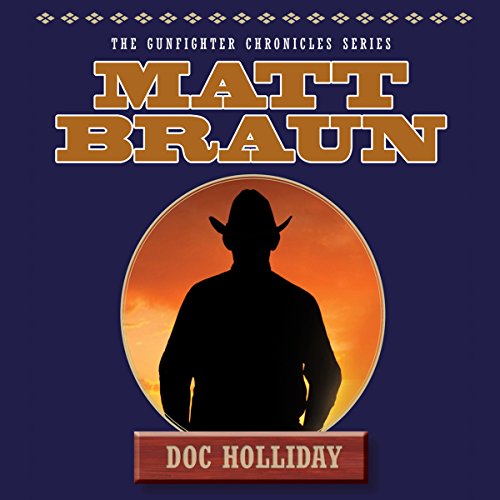 By: Matt Braun
Narrated by: William Dufris
Try for $0.00

He came from the American South, a gentleman by breeding, a dentist by training, a gambler by vocation. But as Dr. John H. Holliday, a man fleeing his tragic past, drifted across the West, living among some of the roughest men on the frontier, word spread quickly he never walked away from a fight, and he never drew too late.

Now, from Dodge City to Denver and Cheyenne, from boomtown to sinkholes, "Doc" Holliday was driven by the demons of his past, a skilled gambler and a seasoned mankiller - his name was known and feared long before the O.K. Corral. The story of a man who spoke softly and carried a lightning gun, this is Matt Braun's extraordinary chronicle of the West's most complex and legendary figure.

What listeners say about Doc Holliday

pretty good historical entertaining book. looking to see if there are others by the same author. performance was well the

The story tell was very good and entertaining. However, I didn't like his rendition of big nose Kate's voice.

I love this title, own a physical copy, tho having the prologue portion would have been nice.

This book was disappointing in a number of ways. Only a few sentences were devoted to the OK corral. The exact dialog between Doc and his associates could not be accurate. The fighting wasn't very good