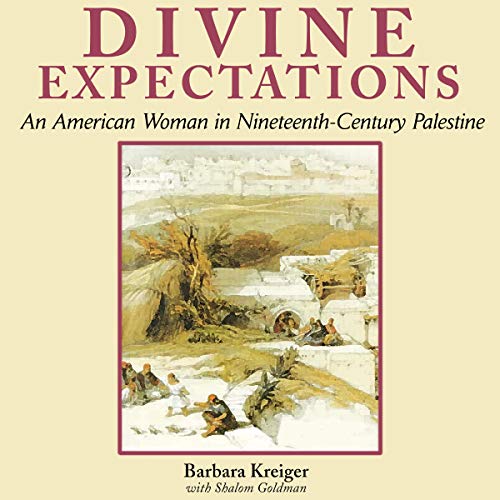 By: Barbara Kreiger
Narrated by: Anneliese Rennie
Try for $0.00

Barbara Kreiger's intriguing narrative presents the account of Clorinda Minor, a charismatic American Christian woman whose belief in the second coming prompted her to leave a comfortable life in Philadelphia in 1851 and take up agriculture in Palestine.

After her disappointment in a failed prophecy that the end of days would take place in October 1844, Mrs. Minor determined the holy land was not yet adequately prepared for such an event and decided it would be her mission to teach the poverty-stricken Jews of Palestine to work the soil. In this very American story, Mrs. Minor, like so many other pioneers of her day, looked to the land as her future.

Even as her mission was distinctly religious, her daily efforts were in the social realm. And although her work brought Jews and Arabs together and her small farm was a unique settlement where Christians, Muslims, and Jews labored alongside one another, the events detailed in Divine Expectations had dramatic and tragic diplomatic and international repercussions.

With the deft touch of a novelist, Barbara Kreiger weaves the little-known story of Clorinda Minor into the larger context of the region and its history, presenting it in its charming eccentricity and its gripping reality.

What listeners say about Divine Expectations

the woman in this novel are really strong, though there are some grotesque scenes that might not be good with people with weak stomachs. The book was decent but nothing amazing. the author has lots of potential.

A strong woman in a harsh environment

Having survives the expected end of the world in October 1844 (known as the Great Disappointment) Clorinda Minor didn't give up her faith but decided to move to Palestine (there was no Israel at the time) and help train the Jews in modern farming techniques. This book covers the trials and tribulations that she and her fellow missionaries went through.

Sadly, many of the trials were based on squabbling within the team. There is a large section of this book covering them fighting (including using international lawyers) over ownership, and thus the income, of a house in Palestine. This obviously was a huge impact on Minor, and thus was a major part of the story, but I felt the book dwelt there too much rather than spending more time discussing the actual work done by Minor and her partners

Note there is discussion of rape and violence against women in this book. There was some horrible events that befell some of those who moved over to Palestine and those events are covered here. So this book may not be everyone, if you want to avoid those discussions.

Narration by Anneliese Rennie was good. Clear, well paced and engaging. She was a bit quicker paced than most, but was not a problem. No problems jumped out at me.