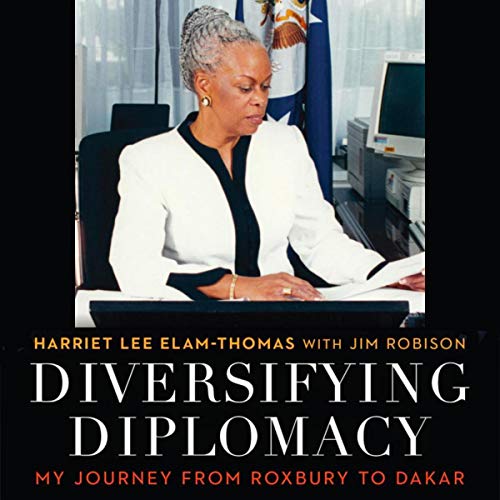 Diversifying Diplomacy tells the story of Harriet Lee Elam-Thomas, a young black woman who beat the odds and challenged the status quo. Inspired by the strong women in her life, she followed in the footsteps of the few women who had gone before her in her effort to make the Foreign Service reflect the diverse faces of the United States. The youngest child of parents who left the segregated Old South to raise their family in Massachusetts, Elam-Thomas distinguished herself with a diplomatic career at a time when few colleagues looked like her.

Elam-Thomas’ memoir is a firsthand account of her decades-long career in the US Department of State’s Foreign Service, recounting her experiences of making US foreign policy, culture, and values understood abroad. Elam-Thomas served as a United States ambassador to Senegal (2000-2002) and retired with the rank of career minister after 42 years as a diplomat. Diversifying Diplomacy presents the journey of this successful woman, who not only found herself confronted by some of the world’s heftier problems but also helped ensure that new shepherds of honesty and authenticity would follow in her international footsteps for generations to come.

"An informative, behind-the-scenes look at one black woman's rise through the ranks of the Foreign Service when few others like her were serving as diplomats." (Kirkus)

“Essential for any student of America’s international affairs over the past five decades.” (Robert L. Dilenschneider, chairman and founder of the Dilenschneider Group, Inc.)

What listeners say about Diversifying Diplomacy