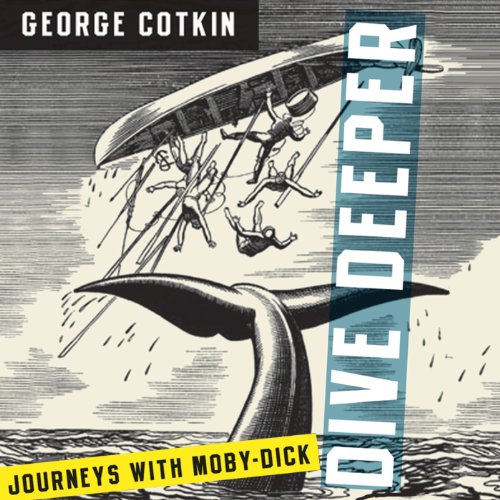 By: George Cotkin
Narrated by: James Conlan
Try for $0.00

Herman Melville's epic tale of obsession has all the ingredients of a first rate drama - fascinating characters in solitude and society, battles between good and evil, a thrilling chase to the death - and yet its allusions, digressions, and sheer scope can prove daunting to even the most intrepid listener. George Cotkin's Dive Deeper provides both a guide to the novel and a record of its dazzling cultural train. It supplies easy-to-follow plot points for each of the novel's 135 sections before taking up a salient phrase, image, or idea in each for further exploration. Through these forays, Cotkin traces the astonishing reach of the novel, sighting the White Whale in mainstream and obscure subcultures alike, from impressionist painting circles to political terrorist cells. In a lively and engaging style, Dive Deeper immerses us into the depths of Melville's influence on the literature, film, and art of our modern world. Cotkin's playful wit and critical precision stretch from Camus to Led Zeppelin, from Emerson to Bob Dylan, and bring to life the terrors and wonders of what is arguably America's greatest novel.

What listeners say about Dive Deeper

first i have to say that I do enjoy this type of thing more than some, not just the Moby connection ( best novel written, with Lolita close 2nd ) but the critical essay type thing. though this is not a critical essay as such it does touch on many aspects of various interpretations and origins etc., but mainly uses the chapter structure and headings of Moby for jumping off places to talk about some aspect of the novel regarding the chapter and it's contents or the novel as a whole, focusing in general on how pervasive Moby is or has become in society ( art, comics, film etc ). Much of it I am already aware and there is much that he has missed, though it would be hard to be all-inclusive, but I do have to say that while there are aspects that started me thinking along new lines regarding a topic, his overall veracity is undermined by 2 questionable chapters, one of which is ridiculous. 1st, in chapter 84, Pitchpoling, he draws what can be at best a tenuous connection between Flaubert and Melville and I suspect that Cotkin simply wanted an excuse to include Flaubert and Madame Bovary because he likes them. But the most egregious error occurs in chapter 89, Fast Fish and Loose Fish, wherein he recounts the use of Moby in (one of many films he could have discussed) Star Trek: Wrath of Khan (valid). He completely fouls up the end of the film to the degree that either he didn't watch it, or he's relying on someone else's recounting without double checking and how this glaring error got by him, his editors, a proofreader, a fact checker etc. without anyone catching it is befuddling. And as such an error exists, it calls into question the validity and fact checking of all of his contentions for all the chapters. In reality much of the info is familiar to me but details and new areas now require validation. and the narrator is completely uninspired in his readings of quoted passages and sections from other works.

Too much ephemera, not enough Moby

I wanted more on Melville. The author has gone fishing. And has returned empty handed.

Impressive Collection of Views on an Old Favorite

I deeply enjoyed this entire piece. Moby Dick has long been my favorite novel, and this was an incredibly refreshing group of observations and reflections that definitely enhanced my appreciation of the original work. Highly recommended for literature nerds, victoriana dorks, and other such reclusive yet pontificating types.