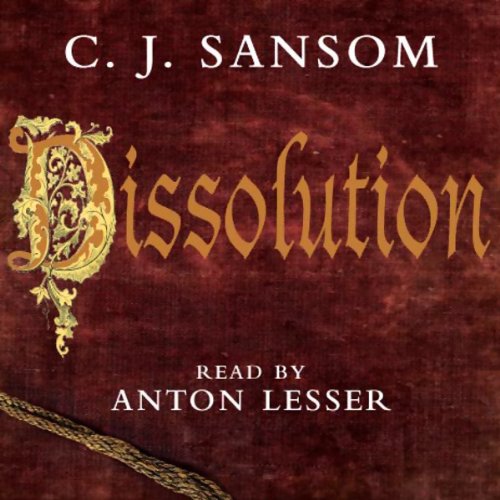 Henry VIII has proclaimed himself Supreme Head of the Church, and the country is waking up to savage new laws, rigged trials, and the greatest network of informers ever seen. Under the order of Thomas Cromwell, a team of commissioners is sent through the country to investigate the monasteries. There can only be one outcome: the monasteries are to be dissolved.

But on the Sussex coast, at the monastery of Scarnsea, events have spiralled out of control. Cromwell's commissioner, Robin Singleton, has been found dead, his head severed from his body. His horrific murder is accompanied by equally sinister acts of sacrilege: a black cockerel sacrificed on the alter, and the disappearance of Scarnsea's Great Relic.

Matthew Shardlake, lawyer and long-time supporter of reform, has been sent by Cromwell into this atmosphere of treachery and death. But Shardlake's investigation soon forces him to question everything he hears and everything that he intrinsically believes.

"Having hugely enjoyed Anton Lesser's reading of Sovereign, the third of C.J. Sansom's Tudor mystery series starring the hunchbacked lawyer Matthew Shardlake, I backtracked to hear the first two in the series, Dissolution and Dark Fire.. . As a trio, they reveal just how skilled Sansom is in creating convincing characters in a fully imagined historical world, and it is no surprise that a television series featuring Shardlake is planned. I'm not sure if Anton Lesser will star in it, but after hearing him narrate all three books, I can't imagine anyone better suited to the role... Following the text in a paperback, I let my eyes chase what my ears were hearing and was impressed at how little had to be lost." Christina Hardyment ( The Times Books)

What listeners say about Dissolution

This audiobook was a wonderful experience. The story is absorbing and well-plotted. The characters, especially Matthew Shardlake, are beautifully drawn and believable. It is very difficult to balance historical authenticity and sympathetic characterisation. The main character's rather modern sensibilities and values are made more credible by his physical disability, which casts him as an outsider in Tudor London. For me, Sansom got it exactly right in that regard. I know nothing of the author's background, but I am convinced he is deeply knowledgeable about the period.
The setting is England during the reformation. The main character is committed to the new order and works for Cromwell. His beliefs and values are shaken by the implications of what happens in the course of the novel. I found the political and domestic intrigue very interesting and absorbing.
I loved the book, and the narrator is simply perfect. His voice, accent and characterisation all got it right. For me, it was the perfect form for the content. I love narrators who are able to suggest dialogue by opposite-sex characters without descending into parody - the deep grumble by a female narrator, or the embarrassing falsetto by the male narrator. Anton Lesser was able to give real depth and consistency to a whole raft of male, female, adult and adolescent characters.
I recommend this audiobook wholeheartedly.

Tudor mysteries are quite fascinating enough for me to keep reading even when there are so many esoteric words. Now looking forward to second book ^^

Best book I read this year

A great book , interesting , bring a vivid view of the 15 century and also a good detective book , I highly recommend

A good historical novel and the narrator was well suited to the tone of the book. Enjoyed it!

An entertaining historical mystery with depth

This is a wonderful series. Matthew Shardlake is an engaging character who is sympathetic to the modern reader/listener without ever becoming an anachronism. He has many of the same worries as any modern person nudging middle age; he?s relatively successful in his career yet increasingly questions the validity of the work he does and frets about the dubious ? not to say murderous ? activities of the people for whom he works. And, poor bloke, he?s looking for love. Shardlake inhabits an unremittingly hard, pitiless world in which his ?deformity? makes him an easy target for open hostility. Is it too simplistic an interpretation to say his disability offers a device by which he can more readily empathise with the pain, if not downright torment, of so many people in cruel Henry?s crumbling kingdom? Even if it is, it is subtly handled and never becomes too obvious. Shardlake questions what is going on around him but never outside the boundaries of credibility. The historical backdrop, a world in which god and religion are wielded with total ruthlessness as weapons of control and destruction, is vivid and truly disturbing. The various historical characters aren?t caricatures and are fleshed out wonderfully. Any person who questions the degree of monitoring in 21st century Britain should thank whatever god they worship ? or not as the case may be ? that, for the majority of the population, spiritual correctness is generally not under government scrutiny. And long may that be the case! And, yes, I agree Anton Lesser makes a perfect Shardlake.

I had read the Shardlake novels in paperback but had put off downloading the audiobooks as I am not normally a fan of abridged novels. However, I'm really glad I changed my mind as this was superb.
Anton Lesser seemed to have got inside my head as his voice characterisation was exactly how I had imagined it. The abridgement had been carefully done with no loss to the flow of the story.
I'm not a full fledged convert to abridgement but I will download the rest of the series and would recommend this to everyone.

I've not heard/read anything by C.J.Sansom before, but I will certainly get more of his books in the future.

I was a bit confused at the start by the references to 'Cromwell' at the same time as Henry VIII, but then I worked out it was Thomas Cromwell (not Oliver, but his great-great-uncle).

There were the usual gruesome murders that you can expect from this genre of fiction, and, I'll have to admit, that it was only near the end that I worked out who did it. There was also lots of interesting background about life in the Tudor period, and the dissolution of the monasteries and the Reformation.

Anton Lessers narrative of this cracking tale is the icing on the cake. He brings the story and the characters alive. No boring characterisations, the story ebbs and flows and at no time does your concentration lapse. Its the first that I have heard from this author but it certainly wont be the last.

This first chapter in the life of Shardlake is an enlightening and compelling read. Above all else it's a "page turner"

An excellent read. Not my usual genre but couldnt wait to read the following book. I am now on the fourth in the series and am looking forward to the fifth and final part.

A crime story with a factual pedigree

I heard of this novel by hearing part of a dramatisation on the radio. As I have an interest in this period of history, Tudor England, I followed it up with the audiobook and was not disappointed. It is basically about the fate of a monastery during Henry 8ths closure of the monasteries. Not only does it shed light on the mechanics of the process but also the conflicting interests of everyone involved. Bodies start appearing and a hunt to identify the guilty adds to the tension.

The style is easy to follow and makes a gripping read

Seriously brilliant book and read incredibly well. I downloaded the rest of the series straight after finishing this one and have remained impressed throughout.

I adore Anton Lesser, his remarkable acting, that

Superb narrator. Superb story, wonderful listen.
The voices Anton Lesser inhabits as he tells the story are so vivid and real.

This is the first C J Sansom book I have read and it is really well written; and the narrator is excellent. This is definitely one that I recommend!

Best narration I have heard on Audible.

I can tell I am going to enjoy the Matthew Shardlake series for its historical setting and entertaining mysteries. But it is the wonderful narrator, Anton Lesser, who will keep me coming back for more. I'd give his performance ten stars if I could.

Excellent narration of an intriguing story!

This was the second time I'd read 'Dissolution' but the first time I'd listened to it as an audio book. Anton Lesser is a fabulous narrator and brings to his reading all the skills of his thespian experience and talents. Having recently finished 'The Mirror and the Light', it was interesting to read Sansom's much harsher and less humane characterisation of Cromwell. It is a shame that it was abridged as it lacked all the details of the original novel. Despite this, I thoroughly enjoyed it! Now to re-read / listen to the next 5 in the series before I read 'Tombland' for the first time. If only Anton Lesser were narrating this one too!

The narration was so good I will be searching out anything Anton Lesser has read based on this book.

What does Anton Lesser bring to the story that you wouldn’t experience if you had only read the book?

The book is a gripping yarn which comes alive with Anton Lesser reading it.

I will now be reading all the Matthew Shardlake series. A wonderful story.

Sansom & Lesser are a perfect duet.

Sansom is a skilled and well informed writer who brings this period of history to life with great plots & characters. Anton Lesser is a masterly narrator and this was pure pleasure to listen to.

I enjoyed the story, probably not what I normally listen but did enjoy it very much

what a fantastic tale of murder, greed and devilish treatment of fellow humans. So interesting. ......