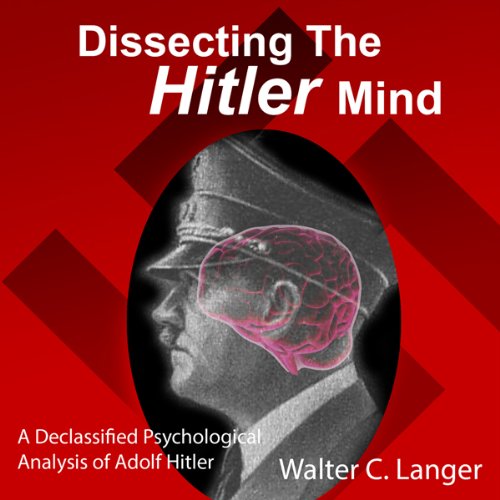 Sex, violent childhood, fear, fits of rage, belief in destiny: They all played a part in creating the personality of Adolf Hitler. What secrets were in Hitler's life?

Psychoanalysis has proven that a person's adult life is determined by his or her childhood. This is the method used to reverse-engineer Hitler in this professional psychological analysis. It looks at his adult life and determines what led him to be the person he became. It reveals many previously unknown characteristics plus it makes many predictions which came true.

Uncover Hitler's sexual deviance, rage responses, mother conflicts, fear of Jewish heritage, fascination with war, feeling that fate had destined him for greatness, feelings of guilt and disgust at his own desires, obsession with poison, and more.

Why did Hitler only mention one of his siblings in Mein Kampf? Why was he always the leader in childhood games? What is the mysterious secret behind the "first more or less political activity" he mentions in Mein Kampf? Did Hitler work as a spy within the army? Why was every 10th man in Hitler's barracks shot while Hitler was asked to stand aside? When did his character transform during his career? How did a man who openly condemned homosexuals as degenerates and ordered their imprisonment associate himself with known homosexuals like Hess and Rohm at the highest level? Was Hitler insane or was he something else, something closer to us all? All these questions and more are answered in this accurate and revealing analysis of Hitlers mind.

This declassified government sponsored report correctly predicted Adolf Hitler's degeneration and eventual suicide and much more. This report is considered to be a masterpiece of "psycho-historical reconstruction". Based on what we know today, the conclusions are frighteningly accurate.

Dr. Langer combined a careful study of documents and other writings about Hitler and personal interviews with informants who had known Hitler before the war. He probed Hitler's mysterious family background all the way into his sexual abnormalities, his extreme fear of death, his Messiah complex, the meaning of his vegetarianism, and many other aspects of his personality. By using his years of experience working with psychiatric patients who demonstrated similar traits, Langer accurately predicted Hitler's increasing isolation, his frequent outbursts of anger, and the general deterioration of his mental condition... even his suicide. Discover the secret side of Hitler that is too unsavory for public discussion.

Would you try another book written by Walter C. Langer or narrated by John Smith?

The chap narrating on the whole was fine, but there was a lady playing the part of Hitler speaking (his campaigns), and she did so in German, which was really annoying if you do not speak German yourself, for all I know she could have been reading her weekly shopping list.

I was expecting (silly me) a biography of the life of Hitler. But it was a compilation of other peoples thoughts and meetings with Hitler. Combined with the German language included, I persevered for 40 minutes before giving up. I wish I hadn't bought it.
This is my first ever review, but I hope it makes other purchasers aware.