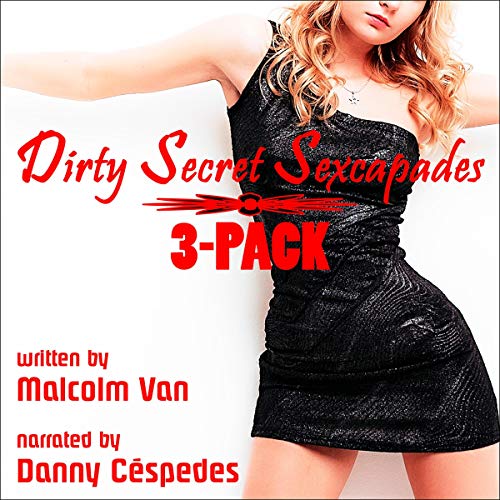 By: Malcolm Van
Narrated by: Danny Céspedes
Try for $0.00

Center Stage: Hollywood starlet and award-winning actress Rebekah Renee Reynolds has an opportunity to nab the role of her dreams, but she has some tough competition also up for the part and an additional challenge awaits her. While able to deliver her lines like no one else, the role in question is for a musical, and Rebekah has no talent for dancing or singing. Still, the great director Ronald Burke is willing to give her another chance to prove herself - a chance to earn her role. All she has to do is take off her panties and make him achieve orgasm in under three minutes. Stunned at first by the offer, Rebekah shortly discovers she is up for the task, but will she succeed in bringing the director to climax before time runs out? Find out in this dubious, twisted piece of smutty literary porn!

Tasting Heaven: After being chosen in a contest, a studly, confident playboy wins an evening at the home of a mysterious celebrity. The evening is set to include a several-course meal featuring dishes created personally by the celebrity. A connoisseur of good food and with a hope that this mystery star was a sexy famous female, the young man prepares himself for a night of delectable treats - eager to eat exquisitely crafted food, and even hungrier to bang another sexy slut.

Yet, when he arrives to his host’s home and discovers the celebrity is actually Silvia Slone - a former Hollywood star now in her late 80s - he begins to second-think his evening’s intentions. The problem is that the aging star has not lost a bit of her sexual drive. She has her sights set on the handsome playboy and is as hungry to taste him as he is to eat the gourmet food. Will Silvia be successful in seducing the contest winner into what could prove to be the best sex of his life, or will the young man’s pallet be content merely with the food from the kitchen?