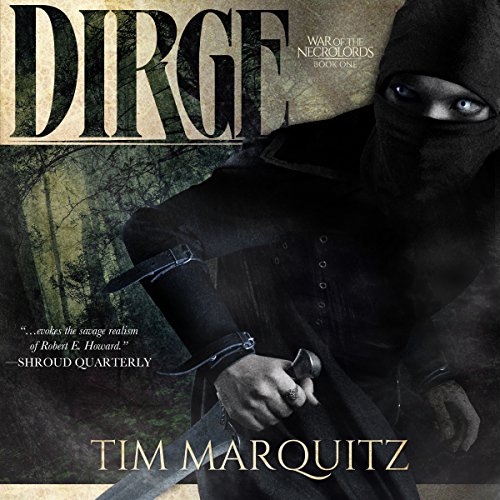 By: Tim Marquitz
Narrated by: Kara Kovacich Stewart
Try for $0.00

Wreathed in the ashes of betrayal, forced to come of age in the dungeons of her stolen inheritance, Kallie Brynn Soren died so that Dirge might be born.

In the midst of an undead invasion, Kallie is gifted powers by a dying priest. His last wish is for her to use them against the Necrolords in a way his faith would not allow. Reborn as Dirge and free of the priest's conscience, she is more than happy to do so.

But when fate brings Dirge into the employ of the emperor - the same man whose machinations brought about the murder of her father - the opportunity for revenge becomes too much to ignore.

Torn between vengeance and the need to protect the only people she dare call family, Dirge learns there is a much deeper purpose to the Necrolord's advance. Should it come to light, it might destroy everyone.

What listeners say about Dirge

Dirge is an exciting tale of an Assassin named Dirge. His character's very identity is a twist on the usual fantasy assassin trope. The author is great at creating flawed but likable characters, and truly despicable villains.

I really like the opening line, "Silence is a girl's best friend, that and a good, sharp knife". Knew I had forgotten something for all these years (snicker).

Tim Marquitz shows us a gritty and violent medieval world overrun by Zombies controlled by Necroloards, an interesting combination of place and enemies. The heroine, Kallie/priestess/Dirge, has had to endure more than her fair share as a young woman and now does everything she can to protect and provide for her adoptive family of clerics and the township of Eton. To help her with her mission she was gifted with some unique powers from a dying priest and friend, Rellan.

I would have liked a little more book time devoted to Dirge's friends and foes to 'flesh' them out a bit more so I could have developed more of an attachment or dislike of them.

Kara Kovacich Stewart did a good job of setting the mood and portrays the more prominent characters well. I would have liked a bit more inflection thrown in to keep my wandering, ADHD mind on track.

This audiobook was provided by the author/narrator/publisher at no cost in exchange for an unbiased review courtesy of Audiobook Blast.

This is the dark protecting the dark story. But the Dirge plays her roll very well, both sides of it. Dirge/Kallie is a most complicated character having inherited many of Rellan's, a preist, powers upon his death so she can fight those he could not due to his faith, but still her best friends are two clerics that try and help guide her.

This story twists and turns more than a roller coaster and has action galore. Dirge/Kallie is a strong and complex character that is well put together and will surprise you in many ways.

A dark and delightful fantasy novel

Would you consider the audio edition of Dirge to be better than the print version?

Oh, absolutely. I really loved the print version but the reader does a great job bringing the characters to like.

Which character – as performed by Kara Kovacich Stewart – was your favorite?

Oh, the lead, definitely. She's amazing and reminds me of Thief's Garret.

Yeah, I wasn't able to, though because of life.

Zombies, thieves, and necromancers, oh my!

Once again, I am reminded that I am not a big epic fantasy fan, especially in audiobooks. I just seem to get lost in them for some reason.

The premise of this book seemed interesting, but I never really felt invested in the story, the characters or anything about the book. I never understood what was going on a lot of the time, the motivation for what was happening, who the characters were and how they related. Maybe in the future if I decide to read epic fantasy, I need to steer clear of listening and go for a physical book. I just found my mind wandering a lot of the time.

The book started with a lot of bloody sword play and that theme continued through most of the book. More of a swashbuckling tale than a fantasy IMHO.

The narrator, Kara Kovacich Stewart, is one of my favorites and she did her usual amazing job with the voices in this book. Her narration is the main reason that I actually finished this one. One minor complaint: throughout the book, the word "Cavalry" was pronounced as "Calvary". I don't know why, but this is a pet peeve of mine.

An Assassin You Shouldnt' Cross

While I enjoyed the story, the performance felt off. Stewart's soothing voice wasn't always appropriate for the action scenes.

Sounded like an exciting story. The story itself was okay but the narration was not as good. It was read as though it were a bed time story and almost put me to sleep several times. I'm sure I would have enjoyed this book more with a different narrator.