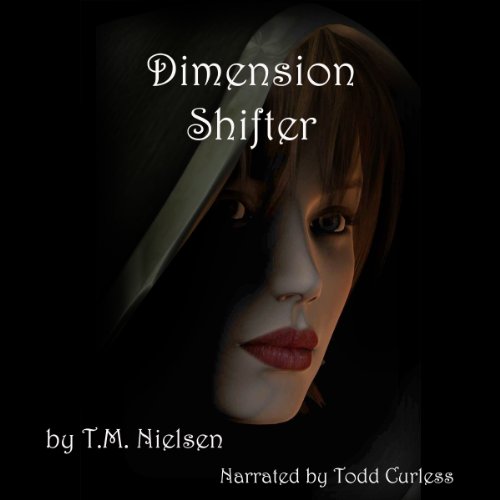 The dimensions are in chaos, magic is illegal, and water is a rare commodity. Kyrin is running from the law. As a magic user, she's marked for death, and as a run-away from the Shadowmere, she's hunted as a weapon. Shifting between dimensions is all that's kept her alive.

On the brink of being caught by the Shadowmere, Kyrin stumbles into a dimension devoid of the drought and seemingly untouched by the wrath of the Consortiums. In this dimension she finds a people innocent of the evils of the universe and naïve to the worlds surrounding them.

Lord Alric has ruled over his kingdom for 15 years under the direction of their god, Sithias. Before his time, the gods fought, and evil was removed from the lands. It isn't until Kyrin arrives that he's even considered that evil may still be among them, or that the long-dead use of magic may still be around.

This fantasy deals rather creatively with concepts of parallel universes or dimensions, archaic and advanced concepts of deities, and learning through diversity. The dynamic interplay of sexuality and violence weaves itself throughout the story line. As well, the repercussions of fear and attraction relative to evil in a land of sweetness and light are interestingly addressed. That which might otherwise be termed as manifestation of consciousness is neatly packaged as magic. This will likely appeal more to younger readers.

the ending of this book is terrible.

One of the worst narrated books I've downloaded.

What disappointed you about Dimension Shifter?

I've read the books, enjoyed them. Saw this audio book and bought it, the story of course is the same, but from all the audiobooks I've listened to this one was the worse read book I've yet to hear, it sounder like a 10 old was reading the book, there was very little emotion and the syntax was horrible, T.M should consider a different person to narrate any other of his books.

Don't get me wrong here I totally enjoyed both books (when I read them) and have read all of the Heku books, I'm actually waiting to have them on audible, so nothing against the author, love his writing, just needs a better narrator.