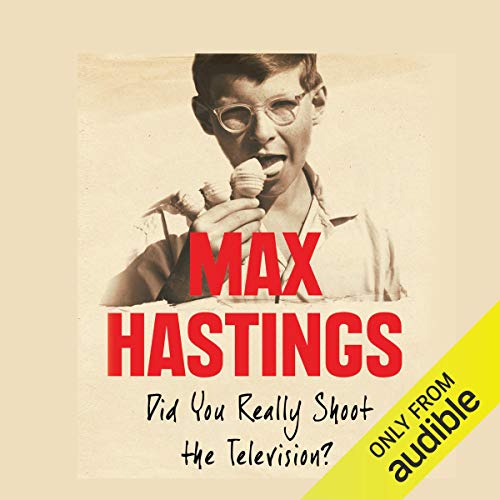 Did You Really Shoot the Television?: A Family Fable

Did You Really Shoot the Television?: A Family Fable

The author is the son of broadcaster and adventurer Macdonald Hastings, and journalist and gardening writer Anne Scott-James. Max’s father roamed the world for newspapers and as a presenter for BBC TV’s legendary 'Tonight' programme, while his mother edited 'Harper’s Bazaar', became a famous columnist and wrote bestselling gardening books. One of Max’s grandfathers was a literary editor, while the other wrote plays and essays. His great-uncle was an African hunter who wrote poetry and became one of Max’s heroes. In this audiobook, the author brings together this remarkable cast of forebears - with guest appearances by a host of celebrities such as Thomas Hardy, Joseph Conrad and John Betjeman. By turns moving, dramatic and comic, the book portrays Max’s own childhood fraught with rows and explosions, in which the sudden death of a television set was only one highlight, and helps to explain why Max Hastings, whose family has produced more than 80 books over three generations, felt bound to follow their path of high adventure and popular journalism.

A story of lost memories.

I loved this book particularly as I knew Max when I was a child. He has mentioned me as "my first girlfriend at the age of four had the unsurpassable name of Merelina Ponsonby". It is a good story evocative of a by-gone age. His description of his childhood and his bad behavior, his fathers adventures and his - very successful - but cold mother are so interesting to read about. He does not exaggerate either. His old Nanny (correct use of Nanny, not as the modern Granny name) are to me amusing, she was a great character and I still remember her over 50 years later. Nannies were our cornerstone of our lives in a world where our mothers did not feature much, and they were simply wonderful. They probably still are!
Max is an excellent writer and he "reads easily" and interestingly. I highly recommend this book.

I've enjoyed several of Hastings works. I'd be happier if he was reader of more of them