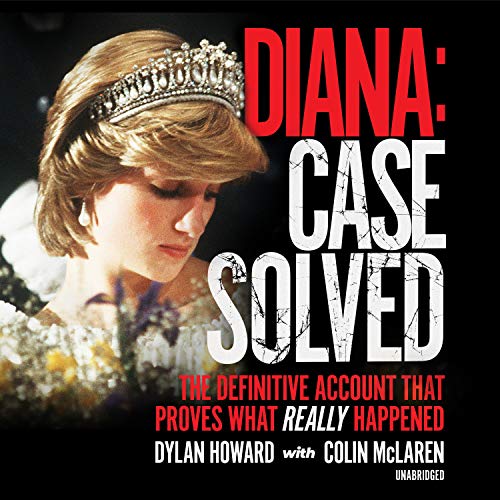 By: Dylan Howard,Colin McLaren
Narrated by: David Linski
Try for $0.00

It is a moment that remains frozen in history. When the Mercedes carrying Diana, Princess of Wales, spun fatally out of control in the Pont de l’Alma tunnel in Paris in August 1997, the world was shocked by what appeared to be a terrible accident.

But two decades later, the circumstances surrounding what really happened that night - and, crucially, why it happened - remain mired in suspicion, controversy, and misinformation. Until now. Dylan Howard has re-examined all of the evidence surrounding Diana’s death - official documents, eyewitness testimony, and Diana’s own private journals - as well as amassing dozens of new interviews with investigators, witnesses, and those closest to the princess to ask one very simple question: Was the death of Princess Diana a tragedy...or treason?

Diana: Case Solved has uncovered in unprecedented detail just how much of a threat Diana became to the establishment. In this book you will learn of the covert diaries and recordings she made, logging the Windsors’ most intimate secrets and hidden scandals as a desperate kind of insurance policy. You will learn how the royals were not the only powerful enemies she made, as her groundbreaking campaigns against AIDS and landmines drew admiration from the public, but also enmity from powerful establishment figures including international arms dealers, the British and American governments, and the MI6 and the CIA.

And, in a dramatic return to the Parisian streets where she met her fate, the two questions that have plagued investigators for over 20 years will finally be answered: Why was Diana being driven in a car previously written off as a death trap? And who was really behind the wheel of the mysterious white Fiat at the scene of the crash?

I think I enjoyed the book.

I enjoyed this book right up until the end when I had to listen to 45 minutes of Diana worship. I just wanted the facts of the investigation. I felt the authors should idolize on their own time.

Disappointing filled with half truths and outright lies

I was really looking forward to learning something new but it seems this book is part of the continued disinformation campaign against the princess, capitalizing on rumors created by the establishment, but repackaging it. A fair attempt at discrediting her and those she consorted with especially since she isnt alive to dispute the lies. Diana was planning on working with Dodi on a documentary film to expose the immense corruption of the royal family and the elite upperclass- worldwide. The film was planning on highlighting their crimes against humanity, including rampant pedophila, sex trafficking, child sacrifice amongst many other horrors. This was the ultimate reason why they murdered her when did. Had she and dodi had lived to see this project through to completion, they would have brought down the entire organized crime network the Royals are deeply involved in. Her star power would have ensured people listened.

I wouldn’t say the case is ‘solved’ but this was still an excellent book. Lots of eye opening details.

I absolutely loved this book . the narrator is amazing , I could listen to him all day! good insite on things ! loved it

I have always enjoyed reading about Diana but I really found this book interesting, believable & something that kept your interest. I enjoyed it much more than I thought I would.

everthing about the. obout the book was awesome , more like 10 stars, love it.

Sent me to sleep about four times, I didn't feel there was much new in here that I haven't already heard before, throws a lot of shade at the British and French police as well as the entire British royal family. Just another version of information that's already out there online and in other books, just from a different person. Narration was ok, nice pitch and tone.

Much ado about nothing !

What a waste of time ! This book just represents old untrue facts again ! Diana was complex and had been subjected to marriage at a young age - Prince Charles if guilty of anything tried to do his duty an error he corrected by supporting both young Princes William and Harry in their choice of wives - I for one am glad to see the joy Prince Charles takes in Camilla . What books like this do is overtake any good that Diana did .

Personally I found it for the most an interesting listen but at times a bit long winded.