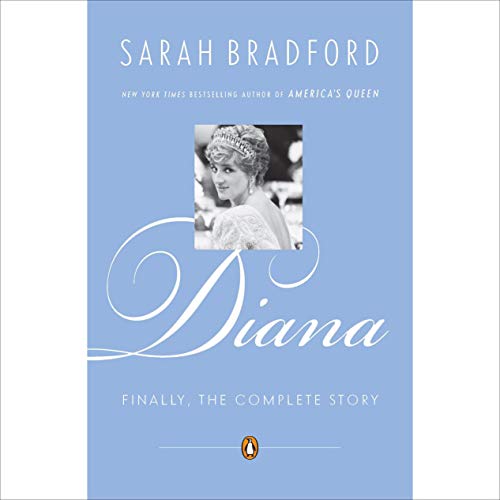 By: Sarah Bradford
Narrated by: Katherine Kellgren
Try for $0.00

An icon remembered as vividly in death as she appeared in life, Diana, Princess of Wales, is one of the most enduring personalities of the 20th century, and one of the most enigmatic. Admired, almost worshipped, a forceful presence in society and fashion and a devoted mother, she was also plagued by rumor and scandal throughout her brief life. Using exclusive new interviews and eyewitness testimony, Sarah Bradford now casts aside the gossip and lies to separate myth from truth.

Diana follows her old-fashioned courtship by the Prince of Wales, as the world began aiming its cameras at the entrancing princess-bride. Drawing on fresh interviews with those close to Diana, some of whom have never spoken on the record before, Bradford sheds new light on the collapse of the marriage once hailed as the ultimate fairy tale. She examines Diana's lovers and her relationships with staff, friends, and family, as well as her profound commitment to charity. Finally, she documents Diana's struggle to find an identity after her seperation from Charles, her final complicated year as a single woman, and the world's overwhelming reaction to her death.

Sympathetic but clear-eyed, with the authority missing from all previous accounts, acclaimed royal biographer Sarah Bradford delivers a complex and striking study of one of the most popular figures of the 20th century.

What listeners say about Diana

Andrew Morton’s book does not even compare

This was such a wonderful portrait of Princess Di. I am so grateful for it’s existence. I have always loved Diana and recently visited London, which reignited that interest. I bought Morton’s book in the middle of my obsession and was left feeling... depressed. It seemed totally self serving and defeating. Even bitter. This book describes in such beautiful detail what it must have been like to grow up in her home, what it must have been like to realize you’re a celebrity, how you use that power for good, etc. Diana was flawed, but after this book, I love her and feel closer to the truth. I appreciate the honest picture that is painted of a sometimes very insecure person who might have gotten too comfortable with the media or the act of manipulation. I grew up thinking Diana died with someone she loved. No. Not in a million years would she choose this guy over her children. Ok. I’ll stop now. I loved this book. You won’t regret it.

Very disappointed with this book. Learned absolutely nothing new about Princess Diana. Highlights of her life were just barely mentioned and contained no real insights. For example, her pregnancies, the birth of her children and mothering style. As a woman, exactly the same age as Diana, and the mother of two daughters, I was curious to find out how she FELT about being pregnant, if she had easy births, did she get to labor and birth the way she wanted, how she felt being a new mom, was she hands on? Did she have to “fight” to spend time with her babies? Personal insights like that. The book gives just facts we already know. She found out she was pregnant on this date, William was born on this date, at this hospital, she was a great mother. Harry, gets even LESS coverage! The entire book is pretty much like that. I found it very boring.

This book seems to because full and true biography of an amazing woman straddling her role in an antiquated system and herself, her roles in a traditional society and as a catalyst for great humanitarian effects in the modern world.

The saddest story you'll ever read. A little too Pro-Charles for me but overall a good book.

Everything in this book is just a repeat of everything I’ve already read about Diana. I’m a bit disappointed.

I might consider listening to the late Katherine Kellgren narrate a grocery list, so I plugged away at this even though it didn't get good, in my opinion, until the end, the last year of Diana's life, when perhaps my own knowledge of what to come lent the biography some intensity. It just wasn't well planned out as biographies go, and Diana's life was indeed somewhat depressing and not always very admirable. I will never understand why she didn't wear her seatbelt...

Sad recounting of a sad person. Exceptionally beautiful physically but exceptionally troubled emotionally. Used by the royals to produce an heir and a spare and discarded. Betrayed and betraying. Well written, Satisfying as an account of a wretched soul