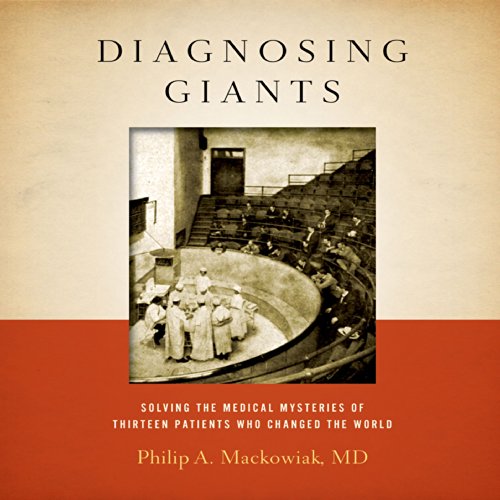 By: Philip A. Mackowiak
Narrated by: Bryan Reid
Try for $0.00

Could Lincoln have lived? After John Wilkes Booth fired a low-velocity .44 caliber bullet into the back of the president's skull, Lincoln did not perish immediately. Attending doctors cleaned and probed the wound, and actually improved his breathing for a time. Today medical trauma teams help similar victims survive - including Gabby Giffords, whose injury was strikingly like Lincoln's. In Diagnosing Giants, Dr. Philip A. Mackowiak examines the historical record in detail, reconstructing Lincoln's last hours moment by moment to calculate the odds. That leads him to more questions: What if he had lived? What sort of neurological function would he have had? What kind of a Constitutional crisis would have ensued?

Dr. Mackowiak, a professor at the University of Maryland School of Medicine, offers a gripping and authoritative account of 13 patients who took center stage in world history. The result is a new understanding of how the past unfolded, as well as a sweeping survey of the history of medicine. What was the ailment that drove Caligula mad? Why did Stonewall Jackson die after having an arm amputated, when so many other Civil War soldiers survived such operations? As with Lincoln, the author explores the full context of his subjects' lives and the impact of each case on the course of history, from Tutankhamen, Buddha, and John Paul Jones to Darwin, Lenin, and Eleanor Roosevelt. When an author illuminates the past with state-of-the-art scientific knowledge, listeners pay attention.

Candice Millard's Destiny of the Republic, about the medical malpractice that killed President James A. Garfield, was a New York Times best seller. And Dr. Mackowiak's previous book, Post-Mortem: Solving History's Greatest Medical Mysteries, won the attention of periodicals as diverse as the Wall Street Journal and the New England Journal of Medicine, which pleaded for a sequel. With Diagnosing Giants, he has written one with impeccable expertise and panache.

What listeners say about Diagnosing Giants

The content of this book is fascinating to a science person like myself. However, the narrator was very distracting. Does anybody remember the old sit-com "Rhoda"? Well, I now know what became of "This is Carlton, you doorman.". He is narrating audio books! At some points he reads ponderously slowly and frequently mispronounces words. He gets the science terms right, but bungles everyday English words. I realize there are alternate pronunciations to many words, but I looked some of the ones he fluffed up and what he said is just plain wrong. It's a shame - the book is really fascinating, but I now wish I had read the print copy.

Variety of challenging diagnostic cases based on conditions of historical figures. Reader's plodding style and numerous unique pronunciations were very distracting and unpleasant

Who would you have cast as narrator instead of Bryan Reid?

Anyone else. My dog could've done better.

Could you see Diagnosing Giants being made into a movie or a TV series? Who should the stars be?

This is an excellent and informative book, but the narrator's voice was so somnelent and adenoidal it was horribly unpleasant. I felt like I was listening to a truculent, bored teenager with a headcold.

What would have made Diagnosing Giants better?

Would you ever listen to anything by Philip A. Mackowiak again?

Not if it is a monotonous and boring as this book is .

He didn't even seem interested in what he is reading . Why should I listen if he isn't even compelled by the story ?

If you could play editor, what scene or scenes would you have cut from Diagnosing Giants?

I only listened to two chapters before giving up . I thought we were going to solve some of the mysteries .

The synopsis was misleading . I thought we would here new insights into great medical mysteries . All I heard was a dull history lesson .

If you are a medically educated person this book may be comprehensible. The book starts by explaining the death of several famous people in history. Then returns to examine how that disease would be treated now with our modern technologies and inventions.

With Abraham Lincoln the detail was painfully too intricate but with Eleanor Roosevelt the detail was just enough to understand the potential for misdiagnosis.

While the detail was a bit much, for medical students this detail was refreshing and educational for premed like myself. I would recommend this book to only this section of my friends.

Move along, nothing to see here....

I did not finish the book for a number of factors, foremost among them was the fact that none of the first five or so patients had their 'medical mysteries' solved. The summation was either "we will never know" because the patient in question is one of ancient historical provenance or painfully obvious - Abraham Lincoln? Was that really a mystery? That aspect of the book could have been redeemed if the backgrounds and stories of each patient had been vividly filled in or elucidated but instead each biography was like a pale encyclopedia (remember those?) entry. Alas this audiobook goes for the trifecta with narration that was extremely wooden and stilted with very uncomfortable cadence and intonation - at least for me, a mid-westerner (USA). I do enjoy the idea of forensic examination of historical figures but this book really fell short of being enjoyable.

Amazing approach to each patient

honestly... I know the narrator and I love everything he reads... it helps that I also love medical books

this reader is so annoying as to ruin the ability to enjoy a book with such scientific detail. he tries very hard to pronounce everything correctly, gets it right 90% of the time, but there is so much strain and artificial phrasing that it feels like someone reading cue cards. great medical mystery worth reading but read the book don't listen to the audio