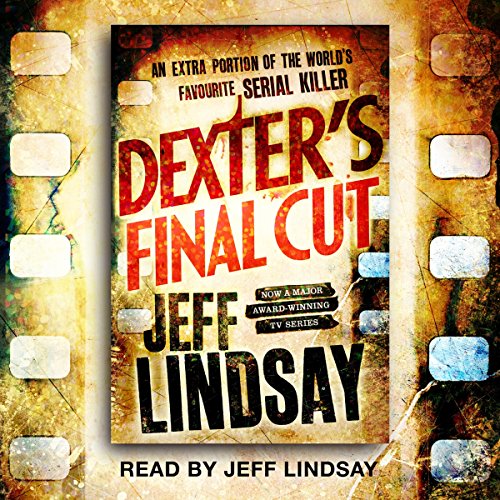 Hollywood gets more than it bargained for when television's hottest stars descend on the Miami Police Department for "research".

Megastar Robert Chase is famous for losing himself in his characters, and he becomes fixated on Dexter Morgan, the blood-spatter analyst with a sweet tooth for doughnuts and a seemingly average life.

To perfect his role as a forensics guy, Chase is obsessed with shadowing Dexter's every move. There is just one tiny problem...Dexter's favourite hobby involves hunting down the worst killers to escape legal justice and introducing them to his special brand of playtime.

It's a secret best kept out of the spotlight if Dexter wants to stay out of the electric chair. The last things he needs are the bright lights and the paparazzi - but even Dexter isn't immune to the call of fame.

Narrated by the author.

love the way Jeff Lindsay narrates his own books. he does need to work on his British accent though, sounded a bit like a bad attempt at an Australian one to me. can't wait until audible releases the rest of the Dexter series to Australian audiences

Don't get the book if you actually like Dexter

Okay let me be very clear before I write this review, I really enjoy the Dexter series. I've read all the books and watched all the TV series [won't go into which I prefer] - so when I say the following it comes from a person who wants the best for this series....

Do NOT get this book [and the next one] if you enjoy the character of Dexter and everything that came before. IF you do read this book [which means you'll need to read Dexter is Dead too] then you will taint your enjoyment of Dexter and have this poorly written book and worse, the next book, ruin your series forever. In all seriousness, if you've taken the time to read this, save yourself the pain and agony of destroying characters you enjoy because an author wanted to get out of ever writing more. End the series with the 6th book and don't waste your money/credits on it.

Here is my last bit before I get into my spoiler specific reasons-- Jeff Lindsay seems to be bored of Dexter and it shows in this book. He decides to ruin the character very quickly and proceed to ruin the fun aspect of the series too. If you are looking for that mystery aspect and for that fun aspect they are almost there, but I'm not joking that they disappear quickly once you get into the next book Dexter is Dead and because this book ends in a way that forces you read Dexter is Dead then it falls victim to all the problems the next book causes.

For the rest here (which will be 'short' by my standards) there will be spoilers- don't read anymore if you don't actually want to know...

So the short version of this book is that Dexter and Deb become the teaching team to a up and coming CSI-like show. Obviously neither want to do this, but they are forced too. We find out the leading lady has a psycho killing stalker who pulls out an eye of his victims [who look similar to the leading lady] and then proceeds to screw the eye socket leaving semen behind that NO ONE EVER BOTHERS TO DNA TEST. [Why in the hell would a forensics expert ever want to do that?] They figure out who the psycho stalker is due to letters and see what he looks like due to facebook and even see he is in Miami. But of course they never actually send anyone out because the leading lady is afraid she'll lose her job. Thus they make Dexter her body guard- which leads to him cheating on Rita and not caring about his kids at all. At a midway point Dexter does one Dexter like thing and tries to find the guy, he eventually does, but does a quick kill thinking this solves the problem-- but very un-Dexter like keeps thinking this guy can't be zombie doing all these other killings that occur, thus ignoring all the obvious signs of someone else right next to him doing it. Through all of this Dexter deals with an ageing old 'popular' actor who is either gay or pedophile but you aren't suppose to figure that out until the big twist near the end [though as usual it's pretty obvious that he's a pedo]. And somehow, Dexter, who HUNTS pedo's NEVER SEES THIS AT ALL! Dexter also does some extra stupid stuff for his character who is so planned out in everything he does. In the end the leading lady dies because she walks in on co-star getting pedo on Astor. Astor is all for it because she wants to be a star actress and she lets him kill Rita and almost kill Dexter. In the end Dexter gets blamed for it despite all the evidence against it because a 'dumb detective' is going to frame him. And that's how the book ends forcing you to get the next one. I won't 'spoil' what happens there, but let's just say, it makes this book look good despite making this book even worse than it should have been.

See I originally liked this book- I thought it was somewhat fun despite it's major flaws. IT had set-up a big finish in the next book. But the next book fell very flat- and destroyed so many characters and concepts provided in the previous books that is was like watching the last season of the TV show- which also ruined so much that came before it.

I'm sorry I ever read it.

So disappointed. Dexter is one of my favourite characters of all time.

I’m so disappointed with this book. Dexter is one of my favourite book characters and my all time favourite tv show. Just like the tv show this has totally ruined the series. After reading reviews I won’t bother getting the last book, as it’s meant to make it even worse

A predictable story but continues the Dexter character nicely. A little disappointed in the direct the characters take but an enjoyable listen if you’ve gone through the other books

Another polished performance by Jeff Lindsay, really captivating the scene and portraying his characters as believable as possible.

Probably a tad slower than some of the other books in terms of action, and sheer excitement. But the story focuses more on Dexter, than on what his hobby, which is a refreshing change.

Without a doubt, the best final couple of chapters of the whole series!!!!! Talk about cliffhanger!!!!