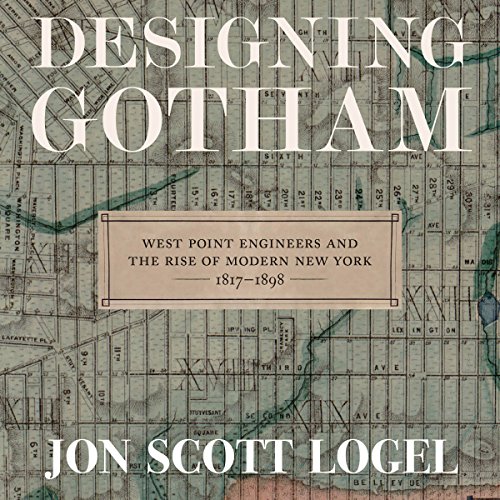 By: Jon Scott Logel
Narrated by: Mark Kamish
Try for $0.00

Between 1817 and 1898, New York City evolved from a vital Atlantic port of trade to the center of American commerce and culture. Although this important urban transformation is well documented, the critical role of select Union soldiers turned New York engineers has, until now, remained largely unexplored. In Designing Gotham, Jon Scott Logel examines the fascinating careers of George S. Greene, Egbert L. Viele, John Newton, Henry Warner Slocum, and Fitz John Porter, all of who studied engineering at West Point, served in the US Army during the Civil War, and later advanced their civilian careers and status through the creation of Victorian New York.

After the war these industrious professionals leveraged their education and military experience to wield significant influence during New York's social, economic, and political transformation. Logel examines how each engineer's Civil War service shaped his contributions to postwar activities in the city, including the construction of the Croton Aqueduct, the creation of Central Park, and the building of the Brooklyn Bridge. Examining the West Pointers' experiences - as cadets, military officers during the war, and New Yorkers - Logel assesses how these men impacted the growing metropolis, the rise of professionalization, and the advent of Progressivism at the end of the century.

"Will grace the libraries of all those interested in the history of the city, or in those important but little-known aspects of West Point's remarkable history." (Theodore J. Crackel, author of West Point: A Bicentennial History)
"Logel's attention to multiple contexts and his balanced interpretation of change and continuity are models for historians in any field." (Samuel Watson, author of Peacekeepers and Conquerors)

What listeners say about Designing Gotham

I was only expecting an interesting doctoral thesis, but this is a history geek's delight! How many civilians bother to wonder about the curricula of West Point beyond the military stuff? Once challenged, it is obvious that civil engineering would be mandatory both for war involvement and reconstruction. And what do graduates do after military service? They insert their knowledge into infrastructure. In the time and place of this study we are talking mostly about things like Prospect Park and the Brooklyn Bridge, just to name my favorites. The exploration of the impact of graduates upon the structure of NYC in the 19th century is well organized and also clearly informative to several kinds of geeks. Like me.
I was fortunate to have my request for an audio copy filled in a giveaway, but it is definitely worth paying for.
Mark Kamish does really well as narrator in that his voice is pleasant, speech clearly understandable, and cadence smooth.

This is definitely written for a niche market, but for fans of military history, civil engineering or the history of New York, it is an absolute gem. The stories and anecdotes it contains are fascinating, and the research is top notch. I was very impressed with the level of detail and the coherent way in which the information was presented. It was interesting to learn the specifics of city infrastructure development in the 1800s.

Personally, I have no interest in New York at all, but I do like history and engineering and have family connections to West Point. I considered this a worthwhile listen.

I received this audiobook for free at my request from the author, publisher or narrator. This has in no way affected my review.

Yes. If you like US history you will love this.

The way the story is told. It was almost like having a conversation with the engineers.

How, who and why Central Park was formed and also the water supply system for NYC

If you are a History nut like myself you should enjoy this book.

"New York a place where a man came with what is new and the see something new."

West Point was the only College pre-Civil War that taught civil engineering.

West Point was not only preparing men for war but on how to fully grow society. The civil engineer curriculum at West Point had a lot of opposition because some people thought men only needed to know military strategy.  But when Sylvanus Thayer was put in charge he made sure the men knew how to build fortresses, remove their sewage, have an understanding of bridges.  Many men had great careers once leaving the army because America was starting to really grow.  This book focuses on a few of the men that went to New York City.

This book does not get into the nitty-gritty of engineering but shows how West Point prepared the men to be organized enough to lead large groups of workers, to ignore politics (some of the men had broke from the union for fight for their southern homeland during the Civil War, only to be reunited with fellow West Point graduates to build and shape cities), and to having the determination to complete the job.

New York City post Civil War was a growing metropolis with lots of industry and ideas.  They did great earthwork projects by clearing the river of rock for easier navigation, found ways to get enough water in reservoirs to service the city, built large bridges across the rivers, started a subway system and worked on the sanitation problem of having so many people in a small area.

Like most books by a college press, this may be a little dry for a casual reader.  But to anyone who enjoys history, military history, NYC, or early civil engineering this book will be quite enjoyable.   Also if you listen to the audiobook, Kamish has a very conversational tone, and actually makes the book very enjoyable with his narration.

about both military history and engineering.

Interesting book. great narration for this kind of book. Was a bit hard to remember who was who. Made me curious to learn more about the subject.