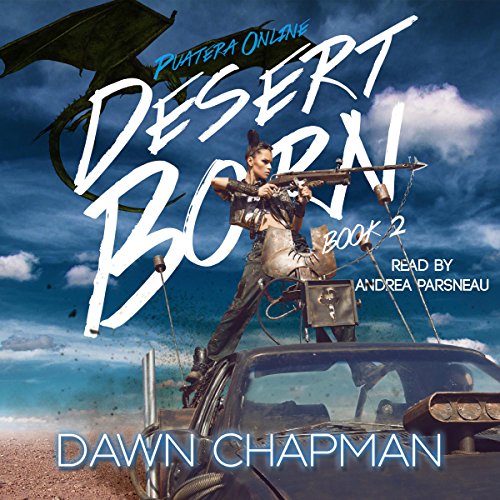 By: Dawn Chapman
Narrated by: Andrea Parsneau
Try for $0.00

With her charge, Alex, safely delivered, Maddie drowns her pain in a local bar, leaving later that night only to discover Alex has been beaten and robbed, his own quest failed. Politics and cash aside, she aids him. Once more they cross the desert, this time where Tromoal and enemies are born.

What listeners say about Desert Born

If you could sum up Desert Born in three words, what would they be?

Alex is a realistic character.

Have you listened to any of Andrea Parsneau’s other performances before? How does this one compare?

No but I did enjoy it.

I asked to receive this book on my own and giving my own honest review.

Maddie is back on another run

Desert Born picks up right where Runner left off, and I appreciate that. I hate it when books have stuff happen in between that needs filled in later, just tell the story. Chapman returns in full glory with her heroine Maddie trekking across the desert. I enjoyed the first book a lot and the second stands up well, not falling for some sophmore slump.

I d want to clarify one thing. This is more of a lite LitRPG, just as in the first book. It is not full of "crunchy" stuff like stats and long readouts of a characters given abilities. We do get mention that sometimes people from outside show up, disrupt the people's lives, and move on, or something simple like how much health a person has, but that is it. I like that, too. I have listened to a lot of LitRPG books lately, and while it might be fine on the written page, which I can skim over the 100 times that appears, I cannot do that in an audiobook, and so I think Chapman strikes a perfect balance of letting you know that the characters are in an MMOPG, but doesn't crush you under the weight of it. Good Job.

In this book we get to learn a little more about Maddie and her relationship to the "dragons", her feelings for Alex come to the front, and we get another harrowing trek across the desert. The writing is solid, crisp, and the characters played believably.

Andrea Parsneau compliments Chapman's writing style, and turns in a compelling performance. She is very impressive, and has become a favored narrator of mine. She could read Good Night Moon, and I'd listen raptly.

This book does set up at least one more book in this series, and I am interested to see where maddie and the Hog go next, and how they handle the next obstacle. I have a suspicion as to Alex's fate, but that will have to wait, I won't speculate here.

2nd book in an up and coming series

This is the 2nd story in a great series told in LitRPG fashion from the view of an NPC. This world has a native population in danger due to a lack
Of food. There are unlikely allies from this world as well as players from our world. Well written with plenty of great twist on tried and true ideas. I was voluntarily provided this free review copy audiobook by the author, narrator, or publisher.

This was a great follow up to the first book. I found that I enjoyed this book just as much as the first and was just as disappointed when it was over a scant 3 hours later. I think I failed to mention in my review of book 1, the narrator is great as well. I just wish these books were longer!

A good continuation of the series

I am enjoying the developing story of a futuristic game that is exceeding its programming and essentially evolving. I like how the unique aspects of the universe are being unfolded and revealed gradually throughout the story, and like the first installment, there's a major development at the end.

Which character – as performed by Andrea Parsneau – was your favorite?

The Puatera Online series is an interesting fantasy story that I'm interested in seeing unfold.

This audio version of the book is just as good as the first one is. The story is fleshed out more, which is very good. I will diffidently be reading more stories by Dawn.

This is a worthy followup to Dessert Runner. I enjoyed seeing how Maddie's character evolved.

If you could sum up Desert Born in three words, what would they be?

What other book might you compare Desert Born to and why?

There isn't much to compare a LIT RPG book based around a NPC.

Her voice flowed well, kept the pace, her use of different voices for each character was consistent and easy to identify. Her voice kept me enthralled and unable to turn it off.

the healing moment, drew me in a lot, showing the emotion of the scene and playing it out well.

Stuff Got Real In Desert Born!

Beaten within an inch of his life and left for dead, Alex's life hangs in the balance. Maddie must find out more about her new powers and her new status within the changing world.  In the process, they find out that the Tromoal are in trouble and need their help.

I will tell you one thing about Chapman - she knows how to build a world AND write characters that you believe are completely real.  The Puatera world is a place that I want to go (or play) and it's something that isn't always easily attainable in LitRPG type novels.  And the characters, man, they are incredibly likable and you end up feeling for them even though they aren't real (sometimes in two different ways - a book and an "NPC").

I'm pretty new to the LitRPG world but I'm not new to the gaming world.  I love the story arcs and the little digs into the "real world" vs the game world. Chapman pulls the curtain back a little in Desert Born and it really gave me the chills when you find out about things outside of the game world (from an "NPC-type" players point of view.

As I said in my title, stuff (I would never use that word in real life, but for Audible, I'll edit it; stuff got real. There was a lot of stuff that happens in this story that tugged at my heartstrings and made me fall for these characters even more than I already did.

Being a nice switch from my normal "doom and gloom" post-apocalyptic genre - this has been a nice change of pace and I've been really enjoying the series.  Look forward to my post for book three since that's going to jump pretty high on my list after finishing this one.

I was voluntarily provided with a free copy of this book. It has not affected my review in any way. If you enjoyed this review, please vote for it! Every vote helps.

loved it. wished went more in depth on a few parts; but still loved it. makes you want more and more

Don't ask me how but this author fits so much in such little space.
Performance is perfect again !
I truly love how this story comes alone and where it's going.
Fun this is what we search in a book, we want to enjoy it and this trilogy or series does it.
I really can't wait for the next one to come out, I really want to see what happens with that twist which came out of nowhere.
Con: way to short.
Pro: excellent story and performance.
Recommendations: Yes I do recommend the series, the author got a beautiful mind he is a true story teller !

A great continuation to the first book. Some sweet new rides, can't wait to read book 3

This book starts off right where the last one finished, which I love. Again it is a thrilling story about different levels of the game. The narration is brilliant and performed with feeling. Great book.