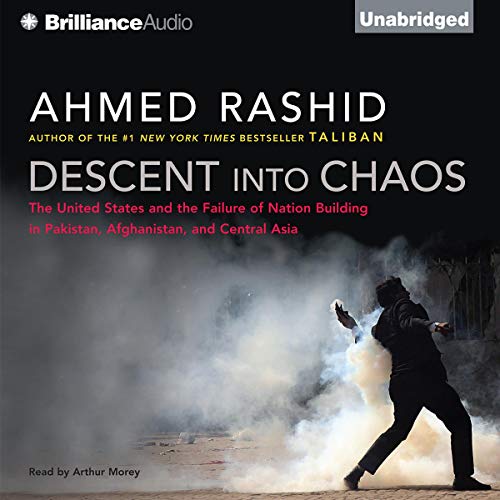 By: Ahmed Rashid
Narrated by: Arthur Morey
Try for $0.00

The #1 New York Times best-selling author provides a shocking analysis of the crisis in Pakistan and the renewed radicalism threatening Afghanistan and the West.

Ahmed Rashid is "Pakistan's best and bravest reporter" (Christopher Hitchens). His unique knowledge of this vast and complex region allows him a panoramic vision and nuance that no Western writer can emulate.

His book Taliban introduced American readers to the brutal regime that hijacked Afghanistan and harbored the terrorist group responsible for the 9/11 attacks. Now, Rashid examines Central Asia, and the corridors of power in Washington and Europe, to see how the promised nation building in the region has progressed.

His conclusions are devastating: an unstable and nuclear-armed Pakistan, a renewed al Qaeda profiting from a booming opium trade, and a Taliban resurgence and reconquest.

While Iraq continues to attract most of the American media and military might, Rashid argues that Pakistan and Afghanistan are where the conflict will finally be played out and that these failing states pose a graver threat to global security than does the Middle East.

Benazir Bhutto's assassination and the crisis on Pakistan are only the beginning. Rashid assesses what her death means for the region and the future. Rashid has unparalleled access to the figures in this global drama and provides up-to- the-minute analysis better than anyone else. Descent into Chaos will do for Central Asia what Thomas Ricks' Fiasco did for Iraq - offer a blistering critique of recent American policy and an impassioned call to correct our failed strategy in the region.

"Long overshadowed by the Iraq War, the ongoing turmoil in Afghanistan and Central Asia finally receives a searching retrospective as Rashid...surveys the region to reveal a thicket of ominous threats and lost opportunities." ( Publishers Weekly)

What listeners say about Descent into Chaos

I was impressed with "Taliban", and was slightly put off by the polemic tone this book takes from the beginning, but I got over that quite early.

The good stuff:
1. By focusing on the internal decision making of the Pakistani and Afghan decision makers (Musharraf and Karzai, primarily), it helped me appreciate the effect of internal factors that I'd never have noticed or known how to process, even if I was living there, as a foreigner.
2. His contextual historical comments are very useful, but they jump around by issue and are hard to bring together. In each section he'll frame the history of the problem dealt with in that section, which helps me understand why it's a problem.
3. His harsh stance on most foreign decisions, including and especially those of the U.S., is etremely useful. Though he doesn't always fully explain the context of foreign decisions, that's fine (since this book isn't about them). The stance is useful for helping me understand what these decisions look like from another point of view.

Onto the negatives:
1. The narrator's abhorrent pronunciation of Arabic names is annoying and distracting. I cannot speak for his pronunciation of names from other central asian languages.
2. The author displays some imprecision in referring to American concepts - e.g., he says torture is forbidden by the U.S. Constititution, which is semantically imprecise; and he says that the PRTs were manned by "Special Operations Forces", which is technically true but misleading when juxtaposed with the description of Special forces. This makes me wonder if I fully understood his descriptions of things I'm less familiar with, like Pakistan.
3. Aside from his consistent stance (shoulda been nation building from the start), his policy recommendations jump around by issue, and are difficult to process as refinements to the original stance.

This is a book about Central Asia and Islam. It is simply unacceptable then that the person chosen to read this book was unable to correctly pronounce the names of the main participants, cities, or ideas involved. Could the producers really not find anyone who could say "Musharraf" or "Peshawar" correctly? The constant mispronunciations were, at best, distracting. While the book itself may deserve more stars, Morey's reading does not.

While the reader of this work makes a valiant effort, he is simply unfamiliar with muslim names and languages and is therefore ill-equipped to properly narrate a book such as this. One wishes to have the proper pronunciation of proper nouns reinforced by purchasing the audio version of a book such as this. There are plenty of Pakistanis and Indians and perhaps even some Afghans who could read this work better than it is read here. It is altogether important that more appropriate readers be found, not only for this but for South Asian novels as well. This said, Rashid's book is important and if this is the only way you'll be able to find the time to read, go ahead and do it. The reader does not get in the way of the basic information and argument of a book written by one of the few in English who actually know what they are talking about when it comes to Afghanistan.

This is a must read (listen to) book. The western press has done a miserable job of informing us on the dynamics at play in this critical region that has produced everything from suicide bombers to nuclear weapons. "Descent into Chaos" is an insider's account of how it became the mess it is and the monster it is becoming. More than a journalist, Ahmed Rashid is a warm-blooded, caring participant in the events he describes. I thought I was well-informed on Afghanistan and Pakistan until I listened to this book on a road trip through West Texas. The dissonance between the richness of this book and the barren void of West Texas was extreme and appropriate.

Finally someone spoke the TRUTH and
Put things in right perspective.

Having read so many Books on Iraq,, Afghanistan, Gener Military WARFARE and Strategy with focus on US WARS.. I can say that... this is one of the most balanced perspective and gives a real.insight
on how the things are for REAL ... SOUTH -&- CENTRAL ASIA.

A Mist Read for All Americans who want to educate themselves in American Military history and particularly on Afghanistan-&- Pakistan.

Amazing, but a little esoteric

I have to begin by saying that I'm work in counterterrorism and often focus on Pakistan, so I may be biased. Rashid weaves a coherent narrative through the bizarre universe of south Asian conflict and politics.

This isn't as groundbreaking as Taliban, but if you have an interest in Pakistan or the roots of the numerous regional and domestic conflicts in South Asia then you should read this book. It's a good use of a credit.

Right or wrong, it's detailed and honest. I think he's right as he is indirectly supported by other independent, objective views.

Too long, but in saying that it has some very good info about both sides. I just wish The characters had names like Fred, Mike, Jeff, or Gordon. It would help in identifying each character in this book. This Mohammed, that Mohammed, the enormous long names most with different twists to the same set of names. After a while I couldn't keep them all apart. It's like hearing a story about a nation of clones.

I read the Taliban and liked it a lot. Descent into Chaos is very different. Rashid is only presenting his own viewpoint which he admits in the beginning. However, he is very simplistic in many of his views. He mischaracterizes the intellectual tradition of the neo-cons, says that central Asia is the birth place of terrorism, and says the US army is currently broken among other things.