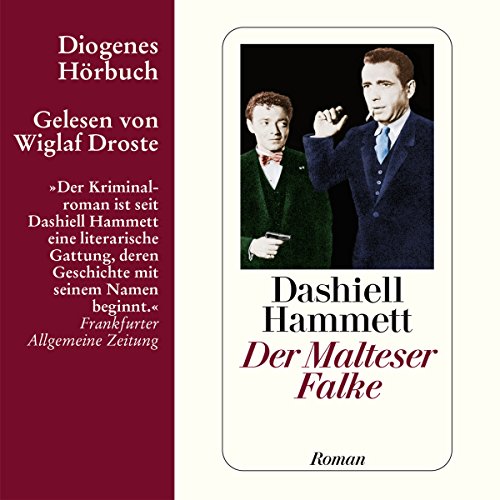 By: Dashiell Hammett
Narrated by: Wiglaf Droste
Try for $0.00

the german reader of this book, wyclaf droste, is quite famous in his own right as a reader in public of pithy and caustically humorous texts in german, so hearing him doing hammett, in ranslation, of course, gives the book a certain edge, which i found quite invigorating.but then along comes gutman, the fat levantine gangster who is after the bird here, and he has this obsequious way of addressing spade, the detective, as "sir", which is unusual in an american context, but not automatically indicative of sexual perversity. the german translator replaced the original form of address with a "mein lieber", or "my dear (fellow)" which gets to be a bit grating, after a while. we are not surprised to hear that gutman's humiliated UTAH=an gunsel later kills him. the falcon's world emerges as surprisingly modern, but also small-scale. THE THIN MAN read by william de fries is, altogether, a more satisfying read, and also, it's in english. both books are fun ways of reconnecting with hammett, whom readers, just reading the books by themselves, might not quite experience the same way.