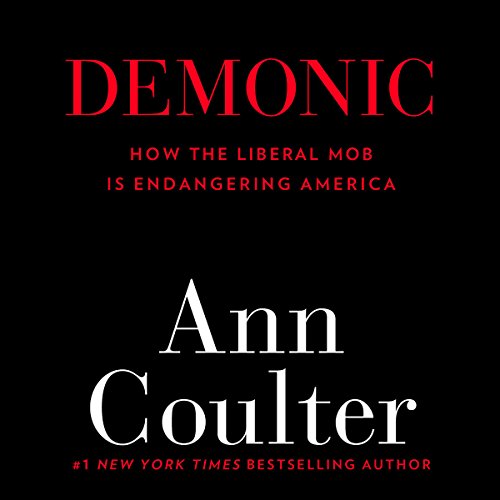 By: Ann Coulter
Narrated by: Elizabeth White
Try for $0.00

The demon is a mob, and the mob is demonic. The Democratic Party activates mobs, depends on mobs, coddles mobs, publicizes and celebrate mobs - it is the mob.

Sweeping in its scope and relentless in its argument, Demonic explains the peculiarities of liberals as standard groupthink behavior. To understand mobs is to understand liberals.

What listeners say about Demonic

Excellent Coverage on the French Revolution

I thought it was as vivid as you can get...great points and learned a lot about the French Revolution; even stories that happened in America. Thanks Ann.

Just when you thought it was safe....

Ann Coulter did it again. This time not only does she call out leftists on their hypocrisy, but she also provides a very detailed history of a number of key events that are generally misunderstood in our revisionist world (French Revolution etc.). If you are a leftist and afraid to listen to Ann, I think you should reconsider. No matter your perspective, she provides well documented insight into the mob mentality and how it is used in modern times. This is the heart of the ultra-leftist (Nazi, communist, socialist, environmentalist, etc. etc.) way of thinking....all facts are relative...the mob (collective good, Volk, common will, State) is holy...

This really is a powerful read, and I enjoyed it for the depth of history provided. This is a candidate within my library for a second listen...not that many books make that grade with me. Highly recommend.

I have to agree with other reviewers that the narrator wasn't the best but she was adequate and the book is magnificent. Ann Coulter is often praised or attacked for her acerbic wit, which she certainly has and it appears in this book, but more than that this book provided an essential piece to my understanding of modern politics and its ideological background. To over simplify it the two primary political philosophies at work today, as they really have been throughout U.S. history and western thought since about the time of the founding of the U.S. are 1. the English school with the writings of John Locke, Edmund Burke and Adam Smith who believed in individual rights and are now usually called, in the U.S., Conservatives or Libertarians and 2. the French school with the writing of Rousseau and Robespierre, who believed in collective rights and are now usually called in the U.S., Liberals or Progressives. Most people, even those interested in or active in politics know very little about either ideological roots but the knowledge and understanding of French school is even harder to come-by. This book is about the French school: the basic philosophy, a historical tale of how they came to power in France, how adherents of this school of thought use the same techniques today to get and maintain power in the U.S. and on a broader scale how people, even more or less decent people, can be devolved to take part in horrible acts against others while shouting contradictory chants about the common good. In writing this book Ann Coulter did not assume the reader/listener has any background in the subjects covered and thoroughly explained the concepts for anyone to understand but she still was able to provide substantial new information to the reader/listener like myself who has studied, read and listened extensively about history, politics, philosophy and economics. This book is truly great and is well worth the credit/money.

AUDIBLE Why don't you have Ann read her own book?
Having to hear this over-actor is grating.

Read your own book

Yes. Ann Coulter is worth reading. She is a public figure and her voice inflections are well known. She should read her own books.

This is a book of commentary. There is no character but the mob.

Her voice was too soft and too light to read Ann Coulter. She could not get the sardonic inflection in her voice to put over the stark sarcasm of the author.

I haven't yet fiish the book. Ann Coulter, read your own books.

I probably will not buy another audible book by Ann Coulter until she reads it herself.

Where does Demonic rank among all the audiobooks you’ve listened to so far?

One of the best books I have listened to in a long time!

So many facts make it that much more interesting.

Did Elizabeth White do a good job differentiating all the characters? How?

Not really, she seemed to just read.

No, I had to break it up into sections so I could process all the information.

Ann Coulter is great at what she does, makes me scared of what the future holds.

The Ann Coulter, that I know --dripping with sarcasm, and wit, as she eviscerates the Liberal and his mindset -- comes through Elizabeth White's performance so well that it makes me wonder if the two are related! LOL This is one of Coulter's better works, and I am pleased that my introduction to Ms White was through this reading!

You Must Listen to This!!!

As usual, Ann Coulter does a great job!! This was reccommended to me by a friend and I am sooo glad I bought!! I downloaded it to my IPOD & listened to it as I worked in my yard, I laughed so hard during some of it that I'm sure my neighbors think I'm crazy! This was great. It has left me wanting to learn more about the French Revolution as I don't remember hearing these things before. This is a MUST listen to book. Ms Coulter does a great job reading it and I always think it is better when the author reads the book. Thank you, Ms Coulter; keep them coming!!!

Ann Coulter's book is a crafted argument connecting the ideology of Rousseau and the mob violence of the French Revolution to modern liberalism. While the connection is obvious to anyone not already indoctrinated into leftist thought, Coulter's book has value in reiterating the history of the French Revolution, as well as enumerating the ideological similarities within US liberalism. Her book explains a lot of reasons why the left rejects US Constitutional principles, all the while purporting to believe in equality. Coulter makes the connection that liberal "equality" is akin to the French "egalite et fraternite."

Coulter's main point, that liberalism is mob rule, explains a lot about liberal behavior in the US, as well as explaining the power elite who want to control and use the mob in order to promote leftist ideals. Coulter's call to arms at the end of the book, in order to fight against liberal mob rule, will be seen as inflammatory.

Two things marred this particular book: the lengthy coverage of a New York rape trial and subsequent "public retrial" through the media (including an appendix on the subject); and the narration by Elizabeth White. While the trial and the leftist media's revisiting the verdict exemplify the indoctrination that can lead to rejecting the rule of law, I'm still unsure why Coulter spent so many pages in its point-by-point rebuttal. White's narration, instead of reading the text straight, sounded smarmy throughout the entire book. Instead of helping the argument, it got in the way.

Blame it on Paris

The French are to blame first, then the Democratic Party according to AC.

AC is very entertaining, and very informative. It sounds as if a lot of research was done in order to write this book. Listening to the history was erudite. Evidently your not going to get this type of history lesson in our schools or universities.

AC's arrogance and all or nothing blame is the main problem. In placing blame she often contradicts herself, even in the same chapter. I believe she should also point out that she is talking about Liberal Elite, not the everyday hard working democrats. I am married to a democrat and she is not the evil, demonic person Coulter paints her. On the other hand Democratic Leaders are suspect. I was a Republican for years, but Bush ruined me on that. I now believe that there is not much difference between the two. Either party will do what it takes to be in power.

I think if you are a strong Democrat you do not want to buy this book, I believe it will probably just piss you off. If AC, Rush Limbaugh and Glen Beck could all be less arrogant and so 100% sure of themselves they would do better for there cause, but they may not have as many listeners or sell as many books.
Preaching to the crowd sells books and gets ratings.

AC is entertaining and very informative. I enjoyed the book and learned about the FR , AR and mobs and how mobs work. Anytime I can learn and be entertained is a plus.