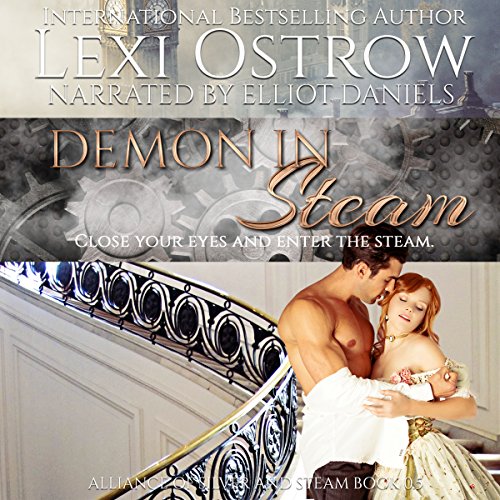 By: Lexi Ostrow
Narrated by: Elliott Daniels
Try for $0.00

In the London Underground, the Alliance of Silver and Steam is all that protects humans from demons.

Felicia Ganon is no stranger to the demons that lurk in the night. After her parents were murdered in front of her, the Alliance took her in and trained her. Vengeance became her only drive.

Greyston Westham is more than just the devilishly handsome captain of the Guard. He's an Incubus Demon who hunts his own kind because they have no use for lesser demons like himself.

When a murderer is running loose that only the Alliance can deal with, Felicia and Greyston are thrown together in a deadly game. Can she overcome her hatred of demons and give in to the relationship that will save her life? Or will Felicia's hatred be her doom?

What listeners say about Demon in Steam

Where does Demon in Steam rank among all the audiobooks you’ve listened to so far?

What does Elliott Daniels bring to the story that you wouldn’t experience if you just read the book?

He adds that little extra bit of charm..

A tragic beginning to a young Girl shapes her into the woman she becomes. A demon hunter…
She will stop at nothing to destroy the one that killed her parents.
Problem is she is not alone. There is another. However he is not who is seems. He is so much more…..
Ms. Ostrow wastes no time in bring you right to the heart of the story. I love that! Now let me tell you this is one hot steamy read. It is short but I can tell you that it is packed with hot sexy pulse raising action! Oh grab yourself a nice tall glass of ice tea with extra ice! You will need it!

A Different Experience in Audio

If you could sum up Demon in Steam in three words, what would they be?

What was one of the most memorable moments of Demon in Steam?

I loved the moment you first meet Greyston. His personality really came out in the narration. I liked him in the printed form, but the audio made the experience different in a great way. I could actually see the character better.

Which character – as performed by Elliott Daniels – was your favorite?

Greyston was the best. You can feel/see the character come alive in the narration. The others weren't bad either, but he was the best.

I did giggle a few times in Greyston's dialogue.

I've read the print version, which is also good, but the audio version was a whole other experience. I could feel the tension between Felicia and Greyston. I could see the characters walking around doing their thing. I wasn't disappointed. I applaud both Lexi Ostrow for her story and Elliott Daniels for his narration.

Would you consider the audio edition of Demon in Steam to be better than the print version?

Not better, but fun

I enjoyed his accent, though he was a bit quick at times and could have benefited from slowing down

I laughed a few times between Geyston and Steven

I was looking for something short to listen to so I selected this prequel. I was delighted with the story as well as the performance. I wasn't sure what to expect a steampunk narrator to sound like, but this was perfect.

She was mated to one of the enemy