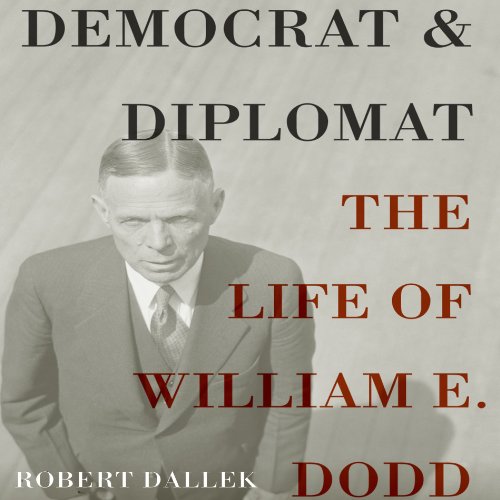 By: Robert Dallek
Narrated by: Ken Maxon
Free with a 30-day trial

Robert Dallek, a luminary in the field of political biography - author of the Pulitzer Prize finalist Nixon and Kissinger and the New York Times best-selling biography of John F. Kennedy - offers here a look at the life of William Dodd, an American diplomat stationed in Nazi Germany.

An insightful historical account, Democrat and Diplomat exposes the dark underbelly of 1930s Germany and explores the terrible burden of those who realized the horror that was to come. Dodd was the U.S. Ambassador to Germany from 1933 to 1937, arriving in Berlin with his wife and daughter just as Hitler assumed the chancellorship. An unlikely candidate for the job - and not President Roosevelt's first choice - Dodd quickly came to realize that the situation in Germany was far grimmer than was understood in America. His early optimism was soon replaced by dire reports on the treatment of Jewish citizens and his pessimism about the future of Germany and Europe.

Finding unwilling listeners back in the U.S., Dodd clashed repeatedly with the State Department, as well as the Nazi government, during his time as ambassador. He eventually resigned and returned to America, despairing and in ill-health. Dodd's story was brought into public prominence last year by Erik Larsen's New York Times best-seller The Garden of Beasts. Dallek's biography, first published in 1968 and now in paperback for the first time, tells the full story of the man and his doomed years in the darkness of pre-War Berlin.

What listeners say about Democrat and Diplomat

I had previously read In the Garden of Beasts: Love, Terror, and an American Family in Hitler's Berlin by Erik Larson. I had totally enjoyed the book

I then see this book on the new release list and bought it hoping to learn more about William Dodd.

What a mistake. This book is extremely boring. Prior to his posting in Berlin, Amb. Dodd was a history professor who moonlighted as a political speech writer. He must have written for every unknown democrat on the east coast, and this book tries painfully to recount them all.

You find yourself saying that the book will pick up when we get to Berlin. It doesn't.

Read Erik Larson's book and pass on this

While the reader's performance was adequate, I frequently found it frustrating. Key names, places -- particularly words derived from foreign languages and proper names -- were mispronounced. In many cases it was as if the words were being pronounced literally as written by a machine, rather than by a reader with at least a passing familiarity with the applicable history, individuals or places.