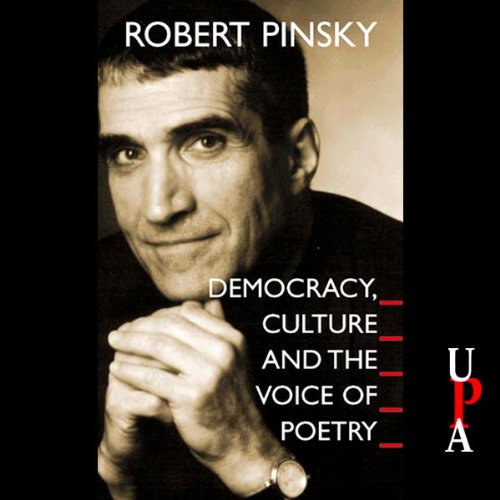 Democracy, Culture and the Voice of Poetry

Democracy, Culture and the Voice of Poetry

The place of poetry in modern democracy is no place, according to conventional wisdom. The poet, we hear, is a casualty of mass entertainment and prosaic public culture, banished to the artistic sidelines to compose variations on insipid themes for a dwindling audience. Robert Pinsky, however, argues that this gloomy diagnosis is as wrongheaded as it is familiar. Pinsky, whose remarkable career as a poet itself undermines the view, writes that to portray poetry and democracy as enemies is to radically misconstrue both. The voice of poetry, he explains, resonates with profound themes at the very heart of democratic culture

There is no one in America better to write on this topic. One of the country's most accomplished poets, Robert Pinsky served an unprecedented two terms as America's Poet Laureate (1997-2000) and led the immensely popular multimedia Favorite Poem Project, which invited Americans to submit and read aloud their favorite poems. Pinsky draws on his experiences and on characteristically sharp and elegant observations of individual poems to argue that expecting poetry to compete with show business is to mistake its greatest democratic strength - its intimate, human scale - as a weakness.

As an expression of individual voice, a poem implicitly allies itself with ideas about individual dignity that are democracy's bedrock, far more than is mass participation. Yet poems also summon up communal life. Even the most inward-looking work imagines a reader. And in their rhythms and cadences poems carry in their very bones the illusion and dynamic of call and response.

Poetry, Pinsky writes, cannot help but mediate between the inner consciousness of the individual reader and the outer world of other people. As part of the entertainment industry, he concludes, poetry will always be small and overlooked. As an art - and one that is inescapably democratic - it is massive and fundamental. The book is published by Princeton University Press.

"An engaging analysis of the way the intimate rhythms of American poetry invoke a social presence.... He concludes that only through the individual reader does a poem reach full bloom." ( New York Times Book Review)
"This is perhaps the most important discourse on cultural analysis by a major poet since Eliot's 'Notes Towards the Definition of Culture.'" (Orlando Patterson, Harvard University)