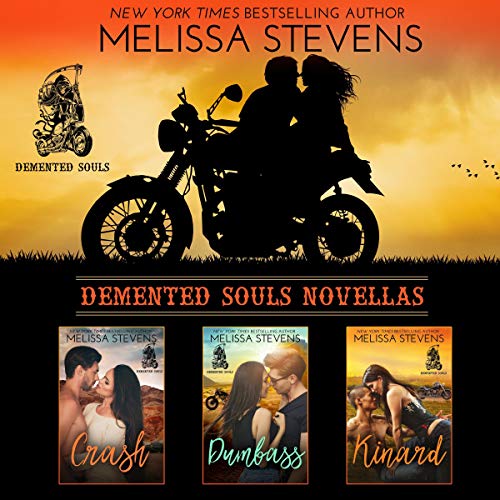 Crash has done it again. There's a reason for his name. Now he's stuck recovering from his injuries, but is he ready for Amber?

Amber has seen it all before. Tough guys and those who never let you see that they're hurting. But she wasn't prepared for one who let people see that soft core. Was there more to the man than just his rough motorcycle club exterior?

Can Crash and Amber make it past the rule of never become involved with your patient? Can they make it work or are they destined to wanting each other from afar?

Dumbass had made some mistakes, but planning the club Independence Day party wasn't going to be one of them.

But he'd need some help. When Jailbait stepped up, and took command over the other girls, he noticed her for the first time. But as a prospect, he had no place wanting her. Jailbait liked being around the club, but she wanted more than to be passed around the brothers. Looking far younger than her age wasn't helping. But when the club 4th of July party puts her working with Dumbass, something develops.

But is he in a position where it could work? Will he be put off by her past? Club rules and customs might just keep them apart, how would they manage?

Chris Kinard lives a double life. In one he's an emergency room nurse, who saves lives and helps the sick. In the other, he’s the club medic and a member of the Demented Souls MC. While the secrecy of these dual existences heavily weighs on him, Kinard knows he could never turn his back on the brotherhood. Unable to take the soul-crushing stress of the ICU any longer, Deanna prays transferring to the emergency room will be an improvement. While she wasn't counting on another nurse capturing her heart, one look at Kinard made her pulse race. As much as she longs to be with him, Deanna knows there are parts of his life he’s keeping hidden from her.

How long can Kinard keep up the charade before his world comes crashing down? Will his web of secrets destroy any chance with Deanna?

This is a collection of three of the novellas from the Demented Souls series. Each book in this series will stand on its own, but I recommend reading them all and in the order of release. Because I haven’t had the advantage of reading the first book in the series, I don’t know if this series usually delves into more of the suspense and undercover work that was alluded to, but I’m intrigued. I’d love to find out if some of the longer books dive into these topics.

CRASH is the second book in the Demented Souls series.

This is a short novella MC romance that starts with Crash opening his eyes in a hospital. Though quick, there is no doubt that Crash and Amber are happy to have found one another.

DUMBASS is the third book in the Demented Souls series.

MC stories rarely allow a prospect to “get the girl.” After all, they are generally red shirts for the fights, buffoons, and/or little more than slaves themselves. They have no rank, so what could they offer the girl of their dreams?

Melissa Stevens apparently said, “Why? Why shouldn’t a prospect get the girl?” And the girl she chose for Dumbass is Jailbait, a girl with a past that might make her as undesirable as him.

KINARD is the fourth book in the Demented Souls series.

If reading these three is any indication, this series just gets better with each and every book. I thought DUMBASS was my favorite, until I met Kinard. Well, that’s not entirely correct. Kinard, was a part of Crash’s story, but now it’s his turn to get the woman meant for him.

Knowing when to reveal a possibly game-changing secret is always anxiety-inducing in a new relationship. That’s what Kinard is facing in his double (triple) life with the MC and his new girl who is also a co-worker at the hospital.

All three of these stories are beautiful, passionate, and yet sweet for being motorcycle-club romance. I love listening to romance from a man’s point of view.

Narration: D.C. Cole does a wonderful job of providing separate voices for the different books and different characters.

Note: While I received this book as a gifted audiobook copy via Audio BookCrave, my opinions are my own and are given freely.

A collection of 3 novellas all involving the Demented Souls biker club. More family friendly than down and dirty, these bikers have heart. This collection has three stand alones but I think are better together as you get a better understanding of the club as a whole and how they treat others. I think that these are well written and narrated, the storylines are good and fast paced and the endings seem a bit abrupt but overall good reads / listens with sweet and heat.

The Demented Souls isn't your average MC. They're one-percenters and proud of it. But they're even more than that. Each of these amazing men harbors a secret that could get them and the people they love killed. Things that even their MC brothers don't fully know, and that's by design.

These novellas follow three of the club brothers, Crash, Dumbass, and Kinard at the point where they meet the incredible women who will change their lives. Think of this as sort of a biker version of a "meet cute," as oxymoronic as that may sound. Because unlike traditional romances that carry through the romantic ups and downs of the couples, these stories really only focus on their meeting, reacting to their spark, and becoming a couple.

These stories are passionate and sweet, but not overly steamy since the romances are just beginning. The characters have nice depth considering the limited time frame of each novella. My personal favorite of the three was Kinard, but all three were worthy reads/listens and very enjoyable. The narrator, D C Cole, did a great job.