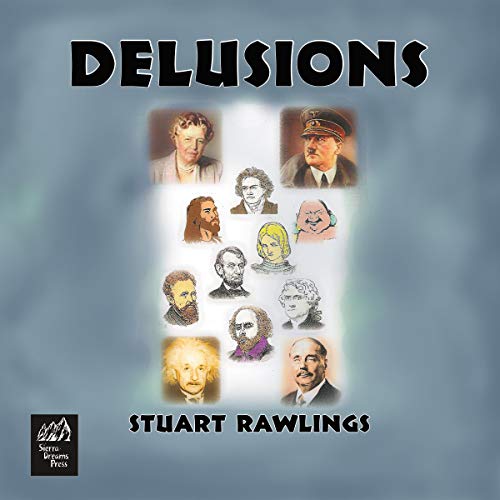 In the second book of Stuart Rawlings’ historical fantasy, The God Child series, listeners are delighted to see many famous people from history return to today’s world. Think Bill and Ted meets Hamilton in One Flew Over the Cuckoo Nest.

The first book Another Messiah describes the development of a mute seven-year-old girl who has withered legs and a magical powers. She tries to move humankind away from its self-destructive tendencies, and along the way, meets characters like George W. Bush, Bill Gates, and the Dalai Lama. It is both fast-moving and fun.

This second book Delusions (originally released in 2012, updated in this new release), treats listeners to the return of some of the most interesting people in history, among them Hitler, Jesus, Buddha, and Eleanor Roosevelt. They interact with each other, as well as with the narrator (Patrick) and the former president Mr. Obama. At then end of this provocative story, the little girl of the first book returns.

The third part of the trilogy The God Child (2019) brings new and favorite historical figures to interact with yet another president, Donald Trump, is also available now.

What listeners say about Delusions