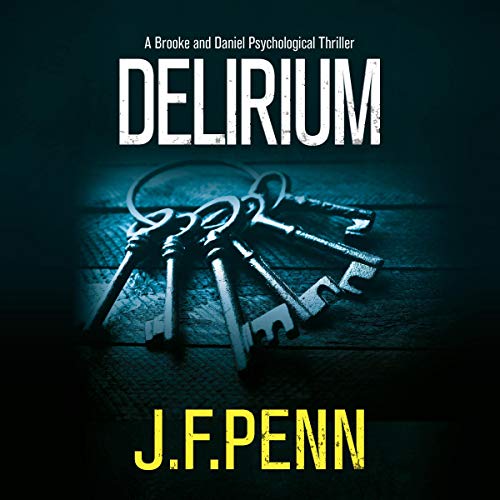 “Those who the gods wish to destroy, they first make mad.”

Devastated by grief after the death of her daughter, Detective Sergeant Jamie Brooke returns to investigate the murder of a prominent psychiatrist in the old hospital of Bedlam in London.

As she delves into the history of madness, museum researcher, Blake Daniel, helps with the case, only to discover that his own family is entwined with the shadowy forces that seek to control the minds of the mad.

As the body count rises, and those she loves are threatened, Jamie discovers that the tendrils of conspiracy wind themselves into the heart of the British government. Can she stop the killer before madness takes its ultimate revenge?

What listeners say about Delirium

If you could sum up Delirium in three words, what would they be?

The complex interweaving of the story lines kept me thirsting for more. From stories of individuals and their families to government conspiracy this book covers a range of topics and emotions.

Most definitely, the story drew you in

The combination of a creative, brilliant writer paired with an excellent narrator makes for an event you don't want to miss.

Delirium - Where madness touches the sane

Where does Delirium rank among all the audiobooks you’ve listened to so far?

This is one of my top audiobooks in the thriller genre. I was on the edge of my seat from the moment of Dr Christian Monro is murdered. It was a wonderfully weaved story that brought mental health issues to the fore and built on the story of Detective Sergent Jamie Brooke from Desecration.

Blake Daniels is still my favourite character because he is a reluctant psychic and the death of his father was touching despite the painful history there. The mystery of his father and the distant yet deeply loving relationship he has with is mother were beautiful to me. I was so worried about him when he was kidnapped and well, I can't reveal what happens to him. All I am glad about is that Detective Sergent Jamie Brooke overcame of vulnerabilities and listened to her own intuition and went to him in his time of greatest need.

What does Rosalind Ashford bring to the story that you wouldn’t experience if you just read the book?

I think that Rosalind Ashford brings a sense of authenticity to the London Psychic series and the characters become realistic in my mind from the way that she narrates and acts the story for the listener. Her use of tone and pace help bring this story to life in a way that I wouldn't necessarily experience if I were to read the book myself.

No. I listened to this book over a five day period. I enjoyed taking my time listening to the chapters that I could while I was in the car or on the train going to and from work. This book took me out of my daily life experiences and put me in a world of mystery, thrills and psychic chills.

J.F. Penn is a fantastic thriller author and definitely improving her writing craft with each and every book in the series.

The history of psychiatry is filled with horror

Jamie is back to work, and Blake is the friend giving her space to work through her grief over the death of her daughter. Refer to the publisher's summary for clues without spoilers.
This tale brings forward the history of psychiatry, including some very uncomfortable truths, and shines a light on the resurgence of some of those treatments and dark attitudes. Woven into the fictional parts of this tale are some unusually clear insights into the perspective of the patient. There is real horror here, as there is far too much truth presented. Enjoy the exceptional writing and the interpersonal tale of these two damaged souls, but do not dismiss all of it as fiction. It is not. I have been a jail nurse; in the US, one fourth of our inmates are the truly mentally ill.
Once again, Rosalind gives an excellent performance and truly enhances the writer's brilliance.

This is one of my first 'reads' in this genre, as I'm a bit squeamish, but I'm intrigued by stories that mix ancient, secret societies with modern day investigations. Mix in a bit of physic ability and you've got me.

I didn't think the voice of the narrator fit the main character at first, but that could be my own imagination rather than reality. The author chose her to read, so my guess is she's more right than I. Either way, she did a great job, and she grew on me. Now, I look forward to hearing her in the next one! (I hope she's in the next one, because I just bought it!).

J.F. comes through with another thrilling novel. Detective Jamie Brooke is faced with a conspiracy to hide the abuse of mentally ill patients. Despite the horrors that reach as high as the government Jamie solves the case and saves her friend.

The latest case in the London Psychic series just grabs you and I found myself listening for longer periods of time then I was planning. New and old characters are blended to create a tale with lots of twists and turns in it. I looking forward to the next adventure for the main character Jamie.

Not for the faint of heart!

I would recommend this book -- it's well-paced and suspenseful, cutting back and forth between plot and sub-plot. Joanna Penn promises a dark story, and she delivers this nicely.

What was one of the most memorable moments of Delirium?

Penn is particularly good a description -- both for small, memorable details and for large, vivid, ranging scenes. One such scene takes place during communion. Shifting back and forth between one parishioner's POV and the mayhem breaking around her, Penn very effectively creates an atmosphere of terror and chaos.

Who would you have cast as narrator instead of Rosalind Ashford?

The narration in Delirium is fine -- but the narrator needn't change voices and affect accents, as she does frequently. It's clumsy in some spots and almost humorous in others, and draws the listener out of the story.

Once again I'm impressed by Joanna Penn's subtle but effective use of imagery. Images of water, drowning, swimming, etc. are vivid and suggestive. And her description of people is similarly sharp (and also sometimes humorous): "Petra Bennett's face had the curious look of a deep-water fish, all lips and heavy cheeks."

It's obvious that a lot of research went into writing Delirium, and Penn manages to incorporate it seamlessly into the story. Well done -- an entertaining listen, right down to the last, thrilling scene.