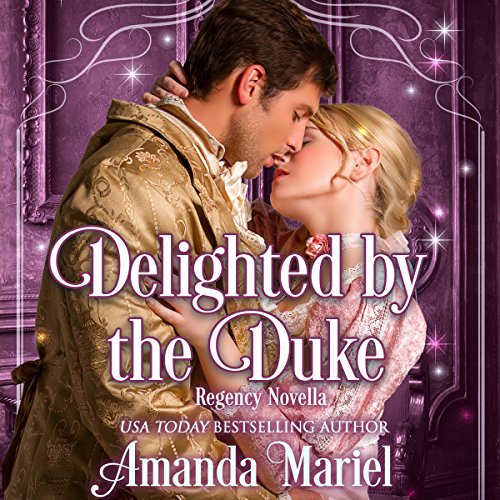 By: Amanda Mariel
Narrated by: Anne Marie Damman
Try for $0.00

Miss Emma Baxter stowed away in a carriage in order to escape her uncle and the baron he's bent on forcing her to marry. The last thing she expected was to find herself with the Duke of Radcliffe, Aaron St. John, and his ten year old daughter, Lady Sophia. Now she faces an entirely different danger.

What listeners say about Delighted by the Duke

A well written, beautiful romance.
This is a story every woman can get lost in. A lady in need of rescue and a handsome duke as her hero. This author pens such a lovely and sweet story, I didn’t want it to end.
The narrator delivers a beautiful performance too. I highly recommend this audiobook.

Miss Emma Baxter has been sold by her uncle to repay his gambling debt. She must find a way to get herself out of this terrible predicament before its too late. At the last minute she decides to run for it and stows herself away in a carriage. She finds herself in the company of a Duke and becomes his daughters new governess. This is a short and sweet story, and you'll fall in love the dukes sweet daughter. The narration is really nice and the short spot when Anne Marie Damman sings is beautiful. Very nicely done!

I enjoyed this short sweet tale.

Anne Marie Damman was the perfect narrator for this tale: her narration was full of passion and drama.

You could feel the events as they took place.

Emma and Aaron were great company and it was fun taking this journey with them.

Would I listen to it again: yes
Did the story keep me engaged: yes
Was I invested in the characters: yes
What did I like about the story? good pace, interesting characters and a happy ending 😊
Was there anything that didn't work for me? not a lot of character development, but given how short it is, it's probably difficult to achieve.

Overall comment: Short and sweet and makes for an easy listen.

Narrator comment: I enjoyed Anne Marie Damman's narration, she has done an excellent job bringing Delighted by the Duke to life and I will happily look for more from her in the future.

Cute to be family

Emma, Sophia, are a cute family to be by the end. Emma has troubles with her uncle selling her off to be married man she despises and she is forced to flee and stows away in the Duke’s carriage. Sophia the duke’s daughter loves Emma instantly ready made family to be. Once again I love the narration keeping me engaged in the story.

It really was a delightful audiobook. A clean listen but had a good story line. The heroine has someone to make her safe. Love rags to riches stories. Narrator did awesome job

This book was easy too short

And because of its shortness, the story was not really developed well. The idea of the story was one that could easily have been great. But the climax was so rushed as to be unsatisfying.

This book moves along quite fast without detail descriptions of every little surrounding in the path.

This is an extremely short book but it was pretty satisfying for what it was. Short and sweet. There wasn't really any depth or character development but I was still invested in the characters.

This a good story, if somewhat predictable. It grabs the reader’s interest from the very beginning. I liked the characters and the way the story unfolded. The interaction between the characters was good. I just wish it would have been longer and more developed.

The narration was very good. Anne Marie Damman did a great job with all the characters.

Short and everso sweet, but sadly not delightful

One of the things I find most soothing about any Regency Romance is the familiarity of the era, having read and researched it so frequently over the years. Unfortunately, this does mean that when an audiobook plays a little fast-and-loose with the historical record, it stands out like Mr Darcy reaching for a smartphone during the Netherfield ball. Such was the case here.

Most jarring was the Duke's daughter, Lady Sophia, (whose age is 7-10 depending on whether you go by the story or the synopsis) referring to her "Momma" in a very modern, Americanised fashion, and the similarly-Transatlantic use of "frosting" for the cake icing.

It is also interesting to note that the "three tiered" wedding cake described in this audiobook would, most likely, not have been more than a single tier. Nor would it have been covered in soft icing of the sort a heroine could swipe her finger through as Emma does. Bride cakes were built to last, with the ability to send portions to absent friends and family; a tradition which continued in some form well into the 20th Century, where it was common for a smaller upper tier of the now-larger cakes to be saved and used at the Christening of the couple's first child. Buttercream would survive neither the post nor a pregnancy! Much more common throughout the Georgian period were hardened sugar icings and baked meringue-style coverings.

The author also appears to awkwardly misuse the word "smirk" with surprising frequency for a book of such brevity. It is usual for a 'smirk' to be a rather smug, self-satisfied expression but it is used in this audiobook for any small smile. For example, the phrase "she gave a sympathetic smirk" feels contradictory, as a smirk conveys conceit, not empathy.

These distractions, and others, meant that this story did occasionally feel a bit like a Regency parody, peppered with lots of additional 'Britishisms' to give it authenticity.

In many ways, I think this story would have worked far better as a 1930s novel than it does as a Regency. The anachronistic elements and exaggerated linguistic style would have been better suited to a more contemporary setting, albeit one in which class and breeding were still key to one's fate. It's a very sweet idea with a lot of promise, but lacks care in its execution.

Short stories are always a tricky format to do well as each sentence has an important role, and they leave the author nowhere to hide. To engage an audience they must really pack a punch despite their limited duration. I did enjoy the premise of this audiobook, and think that had it been longer then I could have come to like the protagonists and care very much for the future of this charming little family. It has the makings of a good story, but is too thin in its current form to do the idea justice. To this end, I found the characters a little shallow; Emma's turmoil is never explored in enough detail to really connect us with her perilous position. Surely being sold twice by two men who should have cared for her would have made her mistrustful and guarded? Yet Emma welcomes the Duke's sudden advances without hesitation, despite the vulnerability of her position. The Duke's character is defined almost solely by fatherhood, (something most Dukes would not have concerned themselves with in such a hands-on fashion), and we are given very little information about his background, or even much on his appearance.

Their first kiss also occurs rather too abruptly for my tastes. I prefer the connection to be a little more established, feeling the attraction between a couple build. If there is to be an 'instant' passion then their mutual desire should be more prominent and consuming from the off.

Overall this is a very sweet, clean, Regency-inspired short story. It is not historically accurate enough to be a true Regency, but is still a nice, somewhat Disneyfied little story with pleasant characters. I'd listen to other short audiobooks by Amanda Mariel, but the lack of research might become irksome in a full-length story if it is typical of her style.

The narrator, Anne Marie Damman, performs this audiobook nicely but her accent is very put-on, and though I am unfamiliar with her other books I'm inclined to think that her usual dialect is American. Words like "calm", "palm", "office", and "often" seldom sound natural when an American narrator is using an English accent, and they are amongst the most noticeable tells in this audiobook too. Despite the accent feeling a little over-acted, she has a pleasant voice and gives her male characters depth which is never easy. Baron Wyndham was especially lecherous and a made for a wholly unattractive and quite sinister prospect. She also handled the singing well, which would have been doubly difficult in a non-native accent. Her voice reminds me of Lark Rise to Candleford's Ruby Bentall at times.

Though it will not suit purists at all, I would recommend this to people who are just looking for a sweet, sentimental, fairytale-style romance with a Regency flourish, which they can listen to from beginning to end over a pot of tea or relaxing in the bath.

*I received this audiobook free of charge in exchange for an honest, unbiased review