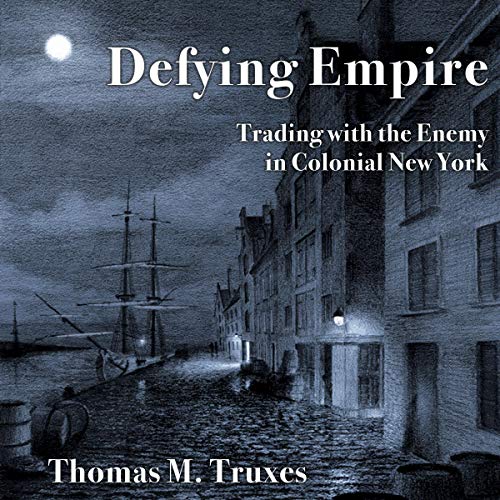 By: Thomas M. Truxes
Narrated by: Michael Kazalski
Try for $0.00

This enthralling book is the first to uncover the story of New York City merchants who engaged in forbidden trade with the enemy before and during the Seven Years’ War (also known as the French and Indian War). Ignoring British prohibitions designed to end North America’s wartime trade with the French, New York’s merchant elite conducted a thriving business in the French West Indies, insisting that their behavior was protected by long practice and British commercial law. But the government in London viewed it as treachery, and its subsequent efforts to discipline North American commerce inflamed the colonists.

Through fast-moving events and unforgettable characters, historian Thomas M. Truxes brings 18th-century New York and the Atlantic world to life. There are spies, street riots, exotic settings, informers, courtroom dramas, interdictions on the high seas, ruthless businessmen, political intrigues, and more. The author traces each phase of the city’s trade with the enemy and details the frustrations that affected both British officials and independent-minded New Yorkers. The first book to focus on New York City during the Seven Years’ War, Defying Empire reveals the important role the city played in hastening the colonies’ march toward revolution.

"An engaging account of New York City during the Seven Years' War." (Choice)

"Truxes is to be praised for his efforts to detail colonial smuggling." (International Journal of Maritime History)

“Simply riveting. This is an important contribution to political history, but it might also be the script for a wonderful TV miniseries!” (Stanley N. Katz, author of Newcastle's New York)

What listeners say about Defying Empire