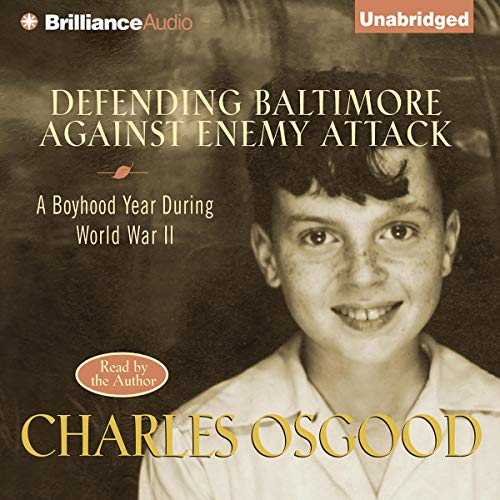 The year is 1942. Charles Osgood is a nine-year-old living in Baltimore. His idols are Franklin Roosevelt and Babe Ruth, a hometown hero. Charlie spends his days delivering newspapers on his daily route, riding the trolley to the local amusement park, going to Orioles' baseball games, and playing with his younger sister, Mary Ann.

With great attention to detail, Osgood captures the texture of life in a very different era, before anyone had heard of penicillin or the atomic bomb. In his neighborhood of Liberty Heights, gas lights glowed on every corner, milkmen delivered bottles of milk, and a loaf of bread cost nine cents.

Although Osgood had many interests as a child, what captivated him more than anything else was the radio. He would listen huddled under the covers, after his parents had turned off the lights, to Spiderman, Superman, The Lone Ranger, the Shadow - and of course baseball.

What listeners say about Defending Baltimore Against Enemy Attack