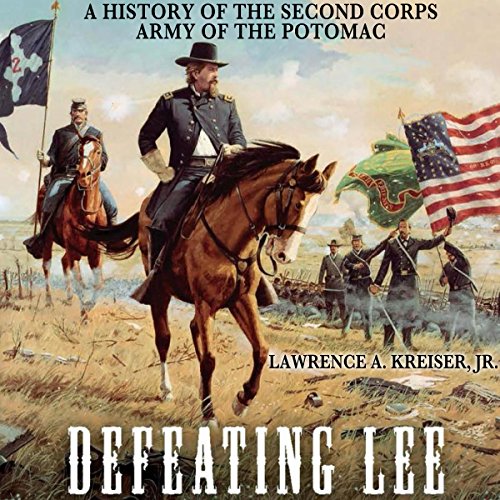 A History of the Second Corps, Army of the Potomac
By: Lawrence A. Kreiser Jr.
Narrated by: Gerry Burke
Length: 9 hrs and 56 mins
Categories: History, Military
4.5 out of 5 stars 4.3 (15 ratings)

By: Lawrence A. Kreiser Jr.
Narrated by: Gerry Burke

Fair Oaks, the Seven Days, Antietam, Fredericksburg, Gettysburg, Cold Harbor, Petersburg - the list of significant battles fought by the Second Corps, Army of the Potomac, is a long and distinguished one. This absorbing history of the Second Corps follows the unit's creation and rise to prominence, the battles that earned it a reputation for hard fighting, and the legacy its veterans sought to maintain in the years after the Civil War. More than an account of battles, Defeating Lee gets to the heart of what motivated these men, why they fought so hard, and how they sustained a spirited defense of cause and country long after the guns had fallen silent.

A great conveyance of facts and timeline. The 2nd Corps was the backbone of the Army of the Potomac and was the biggest cause of the defeat of the Army of Northern Virginia. I enjoyed this book very much.