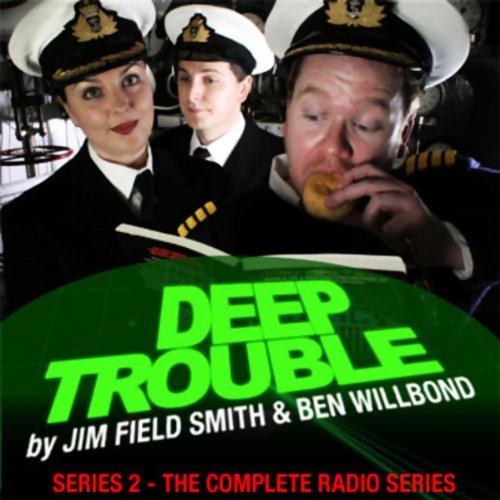 February 2012. Somewhere in the North Atlantic. In an increasingly uncertain defence environment, a deadly new arms race has begun. In an attempt to secure her boundaries, Britain has deployed the very latest sub-sea military technology.

Beneath and beyond the front line, these are the adventures of the HMS Goliath: A 55,000-tonne M-Class nuclear stealth submarine, prowling 5,000 metres below the surface...and manned by idiots. The hugely talented Best Newcomer Perrier winner (1999) Ben Willbond and Perrier nominee (2005) Jim Field Smith (Dutch Elm Conservatoire) have teamed up again for the second series of their sub-sea sitcom.

What listeners say about Deep Trouble

This is a good program that reminded me of HHGTG and Dads Army. It is good British Humor.
Lacking the foul language of most modern humor it hits the funny bone with a silly and twisted look
at the Royal Navy somewhat like McHales Navy of the U.S. It is fantasy and more about the types of people we know and meet everyday. If you like The IT Crowd, Red Dwarf or any of the other great BritComs, you will like this crew, almost always in DEEP TROUBLE. (-:

My favourite characters must be the captain and the admiral. The baby and it's sick very funny

This keeps me chuckling! I play it whilst I'm driving and it's enough to get me through everything that causes stress on the road from traffic lights to bad drivers.