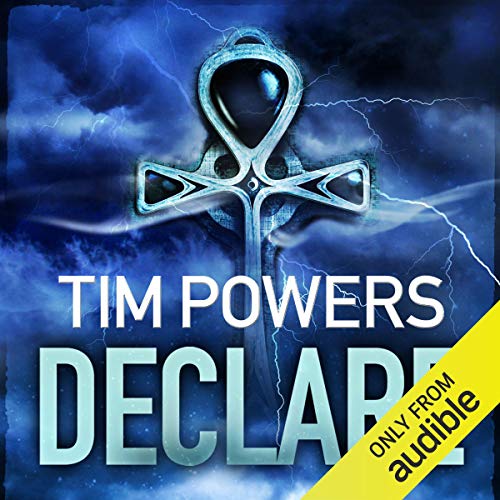 By: Tim Powers
Narrated by: Simon Prebble
Try for $0.00

In his 11th novel, Tim Powers takes his unique brand of speculative fiction into uncharted territory, instilling the old-fashioned espionage novel with a healthy dose of the supernatural.

As a young double agent infiltrating the Soviet spy network in Nazi-occupied Paris, Andrew Hale finds himself caught up in a secret, even more ruthless war. Two decades later, a coded message draws Professor Andrew Hale back into Her Majesty’s Secret Service. Elements from his past are gathering in Beirut, including ex-British counterespionage chief and Soviet mole Kim Philby, and a beautiful former Spanish Civil War soldier-turned-intelligence operative, Elena Teresa Ceniza-Bendiga. Soon Hale will be forced to confront again the nightmare that has haunted his adult life: a lethal unfinished operation code-named Declare. From the corridors of Whitehall to the Arabian Desert, from postwar Berlin to the streets of Cold War Moscow, Hale’s desperate quest draws him into international politics and gritty espionage tradecraft—and inexorably drives Hale, Ceniza-Bendiga, and Philby to a deadly confrontation on the high glaciers of Mount Ararat, in the very shadow of the fabulous and perilous biblical Ark. < /p>

Tim Powers is the author of over a dozen novels, including The Anubis Gates, Last Call, and Three Days to Never. He has received the Philip K. Dick, World Fantasy, and Locus awards. He lives in San Bernardino, California.

What listeners say about Declare

I’d bought this as a book, since the premise really appealed to me, but found it quite a difficult read. Great story, but I struggled to get it to click. This audiobook with excellent narration by the brilliant Simon Prebble made it snap into focus right from the opening lines. A great narration.

Hard to get into but worth the effort

I am a great fan of Tim Powers work. But boy this was hard to get into. The constant time shifts, the supernatural inferences and the slow pace made book 1 very hard going. But slowly over time the various strands came together in a satisfying cohesive whole.
I cannot fault the vocal performance which was constantly superb. But do not expect a quick and easy ride..

The story is stunning - really absorbing and intelligent spy story with a profound occult twist. There's lots of others in this kind of genre now, but Declare is, for me, absolutely original and best. Vivid characterisation, terrifying scenes, and twists galore in the plot. Very well read indeed in a way that maintains the very real tension throughout.

Oddly, although the reading is well done, who produces these recordings? Mispronounciations, inconsistencies (eg KBG??)

A fascinating and entertaining "secret history" of cold war intrigue and other worldly horror. Just my cup of tea. Some Americanisms were slightly jarring (sidewalk throughout where a British narrative as this affects to be would use pavement) but not enough to detract from the overall experience.

Too complex for audio

I downloaded this book having read Hide Me Among the Graves, one of my favourite books of all time. While this was not a bad book, I was lost from start to finish in the level of detail. Perhaps a great book if read traditionally, but in audio it wasn't for me.

Excellent from start to finish.

Tim Powers captures the thrills of a spy novel with the wonder of a supernatural world. He sticks the landing and creates an overall, excellent story.