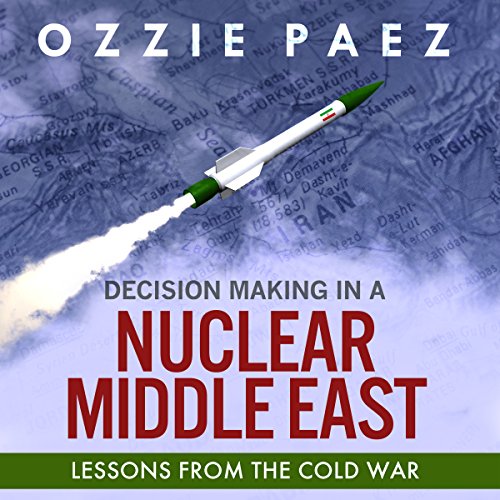 By: Ozzie Paez
Narrated by: James Gillies
Try for $0.00

Decision Making in a Nuclear Middle East analyzes the implications of a nuclear Iran by applying lessons from the Cold War. It takes a hard look at the assumed stability of the Cold War, the judgment of Soviet and American leaders, technology glitches, incidents and events that brought the superpowers closer to a nuclear exchange than they ever planned or expected. It uses these lessons to detail the existential threat posed by Iran's nuclear weapons program in a Middle East context and its implications for a potential nuclear conflict in the region.

What listeners say about Decision Making in a Nuclear Middle East

What did you love best about Decision Making in a Nuclear Middle East?

The logical format and easy to follow analysis of the chronological events leading to the Cold War decision-making of both sides during that era; and the rationale behind the author's conclusions regarding the differences which might influence nuclear decision making in the troubled climate of the present Middle East.

Which character – as performed by James Gillies – was your favorite?

Gillies' ability to segue into the appropriate accent when performing direct quotes of various foreign leaders was captivating and added a touch of color to the reading.

The revelation of the several Cold War occasions when nuclear war was averted after false alarms occurred, and the slim margins by which war was avoided. Then, the comparison to the window of time for such decision making between potential US-USSR and Israel-Iran first strikes, and the consequent ramifications.

Ozzie has written a very comprehensive analysis of the history of world nuclear powers' decision making and its subsequent application/non-application to the current Middle East situation. His conclusions are unsettling to say the least; any diplomat (foreign or domestic) with regional responsibilities should take pause to consider the most likely outcomes he predicts if decision makers do not correctly evaluate events in light of the new paradigm existing in today's Middle East.