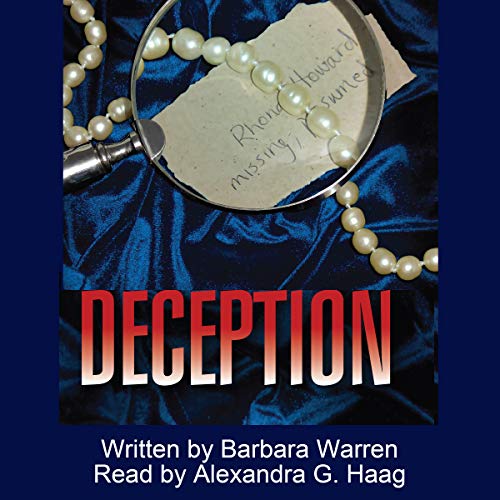 By: Barbara Warren
Narrated by: Alexandra G. Haag
Try for $0.00

Their parents paid the ransom - the kidnappers released one child. Haunted by the pleading eyes of her older sister, Tess Howard has spent the last 24 years searching for Rhona. Reunited at last, the pair is thrust into a deadly world of deception where the bond of shared secrets threatens to choke the light of truth. Blood is thicker than water, but a heart of darkness exacts revenge, not love.

What listeners say about Deception

I really enjoyed the writing in this book and found myself wanting to caution Tess on several occasions. Her confusion and angst come through beautifully as she has to decide who some new people in her life actually are. The story lines for what was happening in other character lives interwove beautifully and the touch of romance with lovely.

The characters were well developed and true to form. I truly enjoyed a clean read without punctuating profanity. Well done, Ms. Warren! Thank you!

I would recommend this book. It will keep you reading until the last page and then wanting more.

The narrator was a distraction for me. Her telling of the story seemed dry and did not hold the emotion the writing did, The book, I would rate a 5 otherwise.

Another great book by Barbara warren

This is a clean Christian book by Barbara Warren. I wish she had more books on audible. It is about two sisters who were kidnapped as children and what happened to them as they grew up separately. I highly recommend this book to one and all. A mystery that will keep you hooked from beginning to end...at least it did me!!

Kidnapped sisters, both ransomed, only one returns

Where does Deception rank among all the audiobooks you’ve listened to so far?

It was really good, I wouldn't say it was my favorite out of the ones I listened to, but it was well done and I enjoyed it. I would recommend it to others.

I liked the friend that was the helped investigate the main characters missing sister. I just felt like I could relate to him more than anyone else in the story.

Have you listened to any of Alexandra G. Haag’s other performances before? How does this one compare?

No I haven't, but I though it was great and really enjoyed it.

Kidnapped sisters, both were ransomed, only one was returned. Years later, the search for the missing sister continues, will she ever be found?