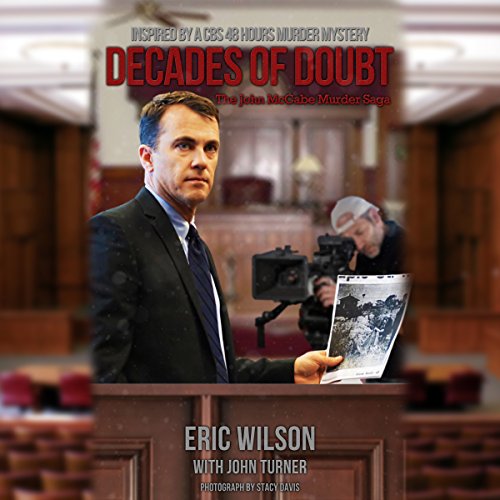 A handsome, high-profile, and tenacious defense attorney. Three elusive suspects. An investigation that stretches across four decades. And two frenetic murder trials. Decades of Doubt: The John McCabe Murder Saga is a gripping true-life mystery that follows the case of a 15-year-old boy bound and strangled in Massachusetts in 1969, the ensuing investigation that continues for over 40 years, and the shocking events of the resulting trials.

As defense counsel for one of three men charged with the crime, New Hampshire attorney Eric Wilson undermines the State's evidence, destroys the credibility of the prosecution's star witness, and overcomes insurmountable odds in an attempt to bankrupt the prosecution's case. And even before the verdict is rendered, Wilson again raises the question to which listeners will beg for an answer: who really killed John McCabe?

This book is inspired by a CBS 48 Hours Murder Mystery.

What listeners say about Decades of Doubt

The narrator took me out of it

I suspect this narrator has trouble pronouncing his own name (in dic did) indeed. And a better name for this book would be. How I got my guilty client off. A Lawyer's Story.

Narration is a total distraction

I'm one hour into this book and wondering if it will be worth finishing. The story is interesting and the writing is good enough but I'm growing bored with the narrator's apparent need to inject himself into it. What with the drama inserted by the narrator, the multiple mispronunciations and the repetitive throat clearings inserted into conversations, I'm rapidly losing interest.

Story was let down by Narration

The story was fascinating, sad and intriguing however the narration was most unpleasant which unfortunately really let it down. The voice had what sounded like a Canadian accent which really didn't suit the New England region and the constant coughing, ahemming (clearing of the throat) and stuttering made listening barely tolerable, and while I imagine there may have been some of that in real life, this does not translate well to the listener and I find it unlikely that all the characters did this as was represented in the narration. Even more bothersome was the high level of mispronunciation of some very basic words.

Would you be willing to try another one of R. Paul Matty’s performances?

Was Decades of Doubt worth the listening time?

The story itself made me persevere through the narration.