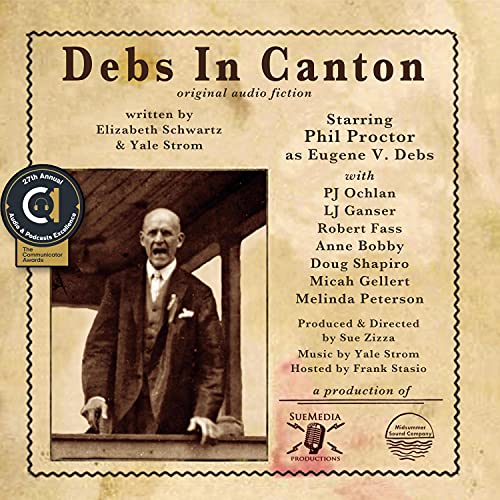 On June 16, 1918, America’s leading voice of conscience, Eugene Victor Debs, stepped onto a stage in Canton, Ohio, and gave a soul-stirring speech against American intervention in WWI. He did so knowing the cost would be severe: Debs was charged with violating the Espionage Act of 1917 and sentenced to 10 years in a federal penitentiary for sedition. The 63-year-old cofounder of the Socialist Party of America ran for president from his jail cell in 1920. He received nearly a million votes.

Debs was an architect of FDR’s New Deal policy that saved the American working class and gave the middle class a chance to build a better and more just life. Today, he is known as being a personal hero to contemporary political thinkers like Bernie Sanders. To those who knew him as “The Man from Terre Haute”, Debs was a simple man, an extraordinary writer and orator, and an energetic believer in the best of humanity and the promise of this great nation.

Debs’ unwavering social conscience and his deeply held Christian faith created the foundation of his political philosophy. But it has never been easy for any man to risk everything - from his possessions, his family, his freedom, or his health - to do what he knows is right. Debs’ crisis is dramatized in Debs in Canton, a new work of audio fiction from SueMedia Productions and MidSummer Sound Company that looks at what his life might have been like in the months leading up to this seminal moment in American history.

“Thank you more than I know how to say for Debs in Canton. It is a truly brilliant production! Phil’s performance was perfect - but I can’t exactly call it a stand-out, because EVERYBODY in the cast was just wonderful. Superb work, and the writing was so RIGHT for the people and the subjects. It was extremely timely, and I am honored to have been able to broadcast it on WFHB-FM.” (Richard Fish, host, WFHB-FM, 91.3FM)

What listeners say about Debs in Canton

Proctor Gives Us A Fine Debs In A Fine Production

It has been said that Eugene V. Debs, the great late 19th Century and early 20th Century labor leader and socialist, was the right man born at the wrong time. He was a compassionate lover of humanity who spent his adult years defending the working class against the oppression and abuse they suffered at the will of the monied, capital class. And he did much good, and his ideas helped change America for the better after his death in 1926. He ran for president four times on the Socialist ticket, the last time in 1920 while in prison. He was put there by opposing America’s entry in “The Great War” thereby “violating” a newly passed sedition law as awful as the one signed by John Adams at the end of the 18th Century. Debs' importance in American history probably cannot be overstated. But he is little known today. That said, if Debs could suddenly reappear in America now, he would see that his dreams for working people have not been completely realized, and would certainly soon become known, becoming the right man at the right time. SueMedia’s audioplay production of “Debs in Canton” is a wonderful introduction to Debs the man, the thinker, the humanitarian. Phil Proctor, who plays Debs in Elizabeth Schwartz and Yale Storm’s one-hour play perfectly portrays Debs’ single-minded dedication to the cause, while showing him to be a loving family man, good friend, and astute political thinker. And most importantly, as a man of conscience willing to go to prison to speak the truth. Proctor, known for his comedy as one-fourth of the great Firesign Theatre comedy group, gives us a Debs we would have wanted to meet and, possibly befriend. He is the heart of this production that is absolutely fine in all categories.