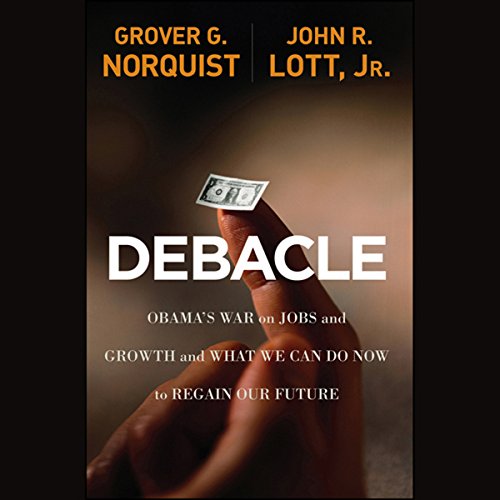 Obama's War on Jobs and Growth and What We Can Do Now to Regain Our Future
By: Grover Glenn Norquist, John R. Lott
Narrated by: Brian Holsopple
Length: 5 hrs and 35 mins
Categories: Nonfiction, Politics
4.5 out of 5 stars 4.5 (4 ratings)

A provocative critique of the Obama administration's economic policies and an examination of America's difficult economic future.

During the 2008 presidential campaign, Barack Obama promised "a net spending cut" to make government smaller in order to reduce the deficit. But this huge increase in government spending and debt, and the resulting prospect of higher taxes, will make America a poorer country. Are Americans happier because the government has determined where this money should be spent? According to John Lott and Americans for Tax Reform President Grover Norquist, the answer is no, and in Debacle: Obama's War on Jobs and Growth and What We Can Do Now to Regain Our Future they explain why.

Arguing that the policies of the Obama administration have created widespread economic chaos, Debacle is a bleak look at American finance from Grover Norquist.