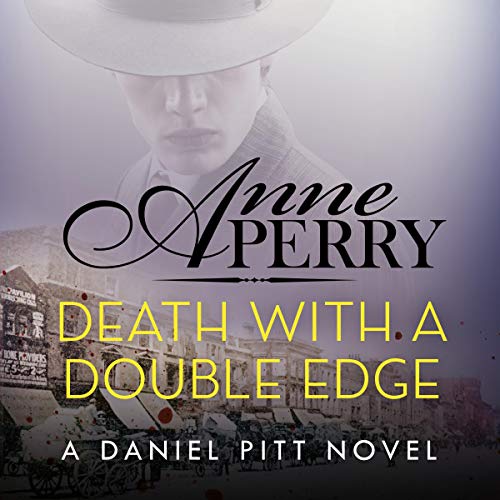 Death with a Double Edge

By: Anne Perry
Narrated by: Christopher Bonwell
Try for $0.00

Death with a Double Edge is the fourth thrilling instalment in an exciting new generation of Pitt novels, from the New York Times best-selling author and queen of Victorian crime, Anne Perry.

It is May 1911 when Daniel Pitt is summoned to a murder scene in the slums of London's East End. He fears the victim is his friend Toby Kitteridge, but relief is quickly followed by dismay when Daniel identifies the dead man as Jonah Drake, a distinguished senior barrister who has been killed with a double-edged sword. But what was Drake doing in Mile End? And does their head of chambers, Marcus Fford Croft, know more than he is willing to admit?

With the police holding out little hope of finding Drake's killer, Daniel and Kitteridge rise to the challenge. Within days, they have leads that take them from the underbelly of the East End to the very highest echelons of society. Then Daniel's father, Thomas Pitt, receives a warning from Special Branch to cease the investigation. But Daniel and his father will not be deterred - despite the risks involved in the pursuit of justice.

What listeners say about Death with a Double Edge

Well book one in this series was pretty darn good.

Book three was Really good and had a brilliant pace again with three murders.

But Wow!! This book was an amazing rollercoaster and absolutely brilliant from start to finish!!!!!

I can not wait for the next one in this series from Anne Perry and am about to start the Pitt/Charlotte series, as I really enjoyed their characters in this series. BUT I’m a little disappointed to see that the first book on audible only starts half way through the series 🥺 and even then they seem patchy!!

So glad I listened to this series first so that I already have some gist of Pitt and Charlotte’s background, but please Audible/Perry maybe release them all on Audible 🙏